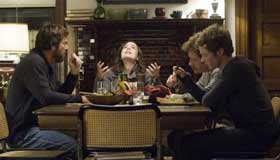 A clear-cut example of “indie by genre” (as opposed to indie by budget), Smart People is intermittently placid and dower with solid performances by its central cast, but it lacks the creativity of form that seems reachable given it’s content. Still, cast and sensibility of film should attract auds in better-than-modest numbers.

Academics, like bloggers, are part of a culture of negation. Agreeing with the terms or ideas of another somehow signals defeat. Though this notion might not be uniformly true, there is much truth to it, as can be read in online reviews—being right often relies upon being the most effective dissenter.

Meet Lawrence Wetherhold (Dennis Quaid). Less aggressive or vitriolic than the average troll, Lawrence teaches literature at Carnegie Mellon and is assuredly strapped with tenure malaise. In addition to academia, Lawrence has made a career out of lethargy. His cruelty towards his students is nearly diligent in effort, and his strangely lazy reaches towards advancement belie actual laziness. Still, amidst this complex association with work, one would be hard pressed to characterize Lawrence as more than just a misanthrope. His status as a widower is given some vague credit for his social dyspepsia, but it’s hard to believe his wife ever altered the course of this downward spiral. After repeatedly parking his Saab over two parking spaces, he’s finally towed and, when he can’t convince a mistreated ex-student to let him retrieve his car, he breaks into the lot, falls off the fence and has to be admitted to the ER. There he meets ex-student crush, Dr. Janet Hartigan (Sarah Jessica Parker), who finds his and his family’s self-importance deplorable. Still, she remembers her college crush, and when he asks her out on a date, she agrees. The romance is pitted with details that seem a touch hard to buy, but like the film as a whole, these details are ultimately inoffensive.

Tone and timing are managed rather well by director Noam Murro, and what little dialogue the film employs gives one a sense of the larger context that allows disaffected bodies like the Wetherhold family to thrive. At the same time, the film suffers from its own disaffect. Certain interactions that should be explored in dialogue or in quietly realized moments are compressed into a near tireless parade of montage sequences that really leach some of the human impulse out of the picture. Music is cute, indie and generally acoustic-guitar-based, which fits (nay, makes) the mood of Smart People, but by and large, the film is a middling one. It’s competent and had the capacity to touch some nerves on the subject of our modern sense of alienation and the cost of being too cerebral, but it doesn’t hit its mark clearly enough or often enough to make a lasting statement.