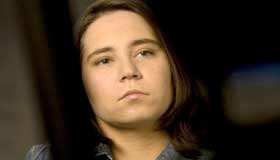 Although Errol Morris’ documentary exerts a gruesome and fascinating grip as, almost five years down the line, he delves into the prisoner abuse at Abu Ghraib, he fails to provide anything that is revelatory—or perhaps some of us have just become numb to the horrors on view through constant newscast coverage.

Morris, in common with most of the world, clearly remains shocked to the core about the photographs which eventually forced out an apology by President George W. Bush and the convictions of several of the perpetrators.

There is something grotesque and chilling about the straight-to-the-camera testimonies of Megan Ambuhl, Javal Davis, Lynndie England and Jeremy Sivitz as they try to explain away their actions and put the background into context. The photographs are preserved intact in the film, which seeks to underline and illuminate yet again this dark and disturbing chapter of American history.

Morris, with his first documentary outing since The Fog of War, seems to run out of steam after he has presented the evidence and raked over the catalogue of man’s inhumanity to his fellow man. His assembly of the material and the protagonists is impressive, but you are left to wonder about his ultimate aim and point of view.

Although technically he uses graphics, animation and recreations to boost the power of the images—all wrapped in a rather intrusive musical score by Danny Elfman—you are left with the distinct impression that less would have been more and that a simplified approach might have served him better.

Morris has explained his motivation thus: “To me, this was a story about these soldiers who took the blame and a story about these photographs that revealed to the world Abu Ghraib, and I confine myself to that story. I am not saying it’s the only story to tell about this place, but it’s the story I chose to tell. I have done my level-headed best to try to uncover new material, and I believe I have done so.”

Certainly the testimony by Janis Karpinski, former brigadier general of the 800th Military Police Brigade in Iraq, is full of outrage and barely restrained anger about the way her superiors managed to emerge unscathed while she and her colleagues took the brunt of the blame.

Whether audiences will share Morris’ continuing concern and compulsion for the subject is debatable, although it should be sure of a decent exposure on small-screen formats and television.