close
Kings finds a spot in a crowded genre 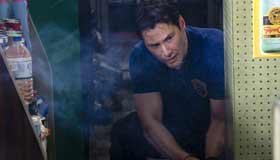 Crime novelist James Ellroy and Training Day writer David Ayer team up to produce a gritty cop crime drama that crackles with LA heat. It would be easy to take pot shots at a film set in the world of bad cops and gangsters, and particularly easy to take shots at one also set in Los Angeles where such stories are well worn and often less interesting than the real stories for which the department has been noted over the years. But Street Kings positions itself well within the genre and has the advantage of casting the original Cool Breeze, Keanu Reeves, against type as a good bad cop who is at once a stalwart hero (his Tom Ludlow rescues a little girl in the opening sequence of the movie) and a dead-bang killer operating on a twisted code of something like ethics and little bottles of vodka. Street Kings will do well with the same audiences that made Training Day a box office hit.

When his former partner is killed and the only officer interested in finding the killer is an Internal Affairs investigator (Hugh Laurie) who’d like to pen the murder on him, Tom decides to join up with the detective (Chris Evans) assigned to investigate the killing. With reckless abandon, he crosses the thin blue line to get the answers he wants, even though it will almost certainly leave him dead.

Oscar winner Forrest Whitaker huffs-and-puffs his way through yet another role (he was bad in Vantage Point, too), but Reeves is backstopped by a host of notable co-starring performances. Jay Mohr and John Corbett are sharp as nefarious cops who may or may not be as committed to a fellow officer as they oft claim, and hip-hop impresarios Common and The Game, playing gangsters whose names are something like Common and The Game, but not precisely, are effortlessly menacing.

Ayer is known for his penchant for gritty realism (such was the praise of his work on Training Day ), a trait also associated with the work of novelist and part-time screenwriter James Ellory, who co-writes here with Kurt Wimmer ( The Thomas Crown Affair, Ultra Violet , Equilibrium ) and Jamie Moss. The realism here is suspect—indeed, contrivances abound—but they’re not particularly offensive. More importantly, Street Kings is buoyed by the spirit of Keanu Reeves, who never fails to astound, at least this critic, by being consistently better than he’s given credit for and nearly always better than most of the films in which he appears.