close
Super High Me makes for a dull and uneven trip 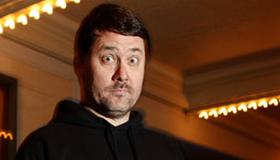 Standup comic Doug Benson mimics Morgan Spurlock (on pot) for this dull and wildly uneven doc about the relevance of, and struggle for, marijuana legalization. Though medical marijuana is legal in California, the DEA does not consistently recognize the state’s law and so asserts its federal power over California’s marijuana “clubs” and “dispensaries,” although they are legal businesses. Though the point of the film is somewhat obscured by its unwieldy structure (stoned director? high editor?), the project overall has the potential to be the stoner’s Rocky Horror Picture Show, and the informal distribution model (offering free DVDs of the film to nonpaying crowds to be screened on—you guessed it—4/20) could result in a strong cultural foothold for the movie, even if it doesn’t score big in the box office.

Doug Benson is a long time pot smoker. As a standup comedian, he’s found ways to not only support his habit but also integrate it into his work. After seeing Super Size Me (which he says is the single worst film to watch when high), he got the idea that he could compare the harm caused by perpetual marijuana consumption against the effects of sobriety to determine if pot is in fact all that harmful. The medical results are middling at best, indicating the only determinate to Benson’s competence when either stoned or straight is chance. Along the way, we see a number of celebrity cameos: Sarah Silverman, Bob Odenkirk, Patton Oswalt and many more.

Ultimately, this film is intended for use with bong or pipe, so its slapdash assembly is almost a moot point in the context of the film’s purpose. No one expects Rocky Horror to be a masterpiece: If it’s a masterpiece at all, it owes much of its stature to the charm of its paltry assemblage. The film’s half-hearted stabs at legitimacy (showing the DEA busts on dispensaries, angry and tearful activists with signs begging for the acceptance of medical marijuana, etc.) are executed to feel like highpoints in the rhythm of the film, but function as proof the filmmakers were, shall we say, “chill” about their approach. When we finally see a dispensary raided by DEA agents, the event carries with it the irony of censorship: The DEA confiscating boxes of high-grade pot invokes memories of so many Victorian smut trials. (“We’re not sure it’s porn. We need to watch it one more time to be sure.”)

Ultimately, the film’s a weak effort intended for a crowd that will be attending as an event associated with a social culture. It’s therefore not so fair to grade it on the same scale as a film intended to captivate an audience. This is not, after all, There Will Be Blood. This is a party film that has no ambitions to be anything else. As such, it mimics the possible attention span of its (affected) audience and poses a strange issue for the critic. Generally a critic’s word might have some bearing on a film’s reception or at least influence the desire of the possible patron. In the case of Super High Me, if you’re interested in the film, you’re likely interested in the culture and my suggestions are therefore as neuter as the stoners in the film: Affected and possibly innocuous.