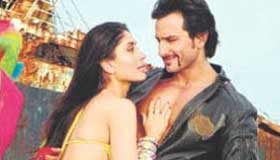 Tashan is a big italicized exclamation point of a Bollywood blockbuster unabashedly stealing Hollywood’s hubris and tricks to the fullest. But praxis is far from complete. The sudsy shoot ’em up gone screwball is brimming with too much bravado and flopping punchlines that render the picture a hard sell to be taken serious. Nevertheless, flocks from Mumbai to Midtown Manhattan will sit through all 160 ear-thumping minutes for the pyrotechnics, the dazzling stunts and slow-mo kabooms in virtually every cut.

One wonders if the film’s director Vijay Krishna Archaya solely pulled from the artificially sweet-sauced pan of Jerry Bruckheimer and/or John Woo’s maximum overdrive methods. In this crime caper, a tough guy lead with a soft side named Jimmy Cliff (Saif Ali Khan) plays your average Joe (minus the body-building physique and Hulk Hogan-shaped mustache) making ends meet at a call center while teaching nursery rhymes to locals. Often, he slips into English slang for kicks. We start in the future with him jumping a cliff in a red Mercedes, a pistol pointed at him while sinking deep into the Ganges.

Trailing back, he retreats to the day he met the femme fatale (Kareena Kapur) in Pooja. She plays the Cinderella who’s enslaved by the quirky yet demonic warlord Bhayyaji (Anil Kapoor) who favors a cricket bat to crack heads—or he gets off nifty one-liners like, “I’ll play cricket with your balls.” While chasing the buxom brunette, Cliff gets hired as an English teacher for the gangster, who is wooed by his dialect, which he likens to George Bush and “Prince Charlie.” Truth is, it’s neither of those—the guy looks and sounds like Bono from U2, if the Irish lead were to down protein shakes and lift free weights instead of a microphone.

The love triangle is completed when Pooja and Cliff make off with the boss’s loot to pay off her slain father’s debt, but the dame strays—leaving the buffoon don fuming because he wants to marry Pooja. After the prized teacher and slave-wife-to-be deceive Bhayyaji, he sics a flamboyant bounty hunter Bachchan Pande (Akshay Kumar) to track her down. So ensues the obtuse love triangle.

With the dance numbers that are peppered into the mix, at one point Cliff proudly suggests to the American filmmaker they take hostage to avoid authorities giving chase, “Dude, this is India—there’s a song for everything.” In a sense, the metaphor here is pretty blunt: Take the American movie hostage and inject some Bombay spice and voilá! Hard to recall the musical video numbers as they get overshadowed by the Mexican standoffs that put to shame Rambo and Commando as harems of thugs fall to the prowess of the trigger-happy and deadly accurate principles.

The elements of the production are jumbo in size. Everything is somewhat caricatured and nuanced. Pooja, the Svengali princess, at one point dons a blond wig and Jackie-O sunglasses—making her a dead ringer to Paris Hilton. Surely, this is no subtle coincidence.

There will be an “interval” or intermission in this epic to give a few breaths from the twists and zigzags that create one perplexing knot. Still, there is clearly a sign here that the filmmaking has jumped the once pared-down lowbrow Bollywood flicks of before. In Tashan, one can see the filmmaking has come a long way from the makeshift theatres at taxi stands where curry and sweets proprietors broadcast the newest and latest on dubbed VHS. But the product has a long way to stir to get to a place where the skills can get their due. Following a formula too close to the tee caters to homage but leaves at home the distinctive soul that the medium deserves.