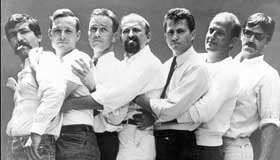 As sexy/savvy as the art community it represents, The Cool School sweeps you off your feet with quick-witted visuals and cleverly used archival footage. Doc about the nascent years of the LA art scene does an excellent job exposing the movement’s unique tension between art and commerce, struggle and success. Film’s formal stealth matches the tone and temper of its subject with great finesse. Though it’ll assuredly be a hit with art lovers and likely have a long second life in the educational market, the most vital life this doc is likely to have will be on the tube.

In the late ’50s, Los Angeles had a reputation for its film industry and its beatnik culture, both of which were regularly vilified with accusations of communist association. From the sound of it, the universe of new American art seemed localized to the island of Manhattan and seemed not to extend much further than the five boroughs. Director Morgan Neville explores this divide, but in a way that expresses the cultural schism as one that was ultimately temporary—at least, temporary for the artists who created the LA scene. Of course, the scene had a bumpy start. A lack of acceptance among the communities it was meant to attract, an association with communism that could have proved dire and an early absence of patronage made this movement look like the (art) school of hard knocks. Though the machismo, artistic devotion and poverty all resulted in a sort of sexy lefty/glam, the movement was made up of some sincerely talented artists, and the surviving scenesters are all featured here in interviews.

While the content of the doc, beginning with the history of the movement, its “uphill” journey into recognition, and its poetic triumph (possibly at the hands of commercialization), is well organized and littered with magnificently well chosen archival footage, what sets The Cool School apart is its temper. In no way does the swiftness of the film’s tempo belie the effort of construction present in the work. Much like the rigor of furious brushstrokes, one can feel Neville’s intensity and intention. His choices aren’t labored, but they’re far from easy. Once the film reaches the eventual “golden bowl” dialogue, it seems less concerned with whether this movement’s phase shift from new methods of abstraction to an emphasis on consumer products (in a less than critical way, mind you) is a challenge to the pure-art-versus-commerce argument. Instead, Neville doesn’t impose a position. He lets his artist interviewees express and vent and cast judgments, but he himself is reticent to judge.