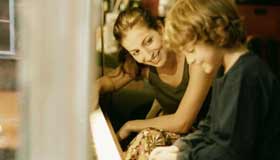 For the first time, the great Taiwanese filmmaker Hou Hsiao-hsien ( Three Times, Café Lumiere ) has made a movie set outside of Asia. The project, alas, is of little interest.

Loosely based on the 1956 French short film Le ballon rouge, which followed a boy and his red balloon around Paris, Le Voyage de ballon rouge situates that film’s main character within a larger canvas. The boy, Simon (Simon Iteanu), is the son of Suzanne (Juliette Binoche), a French puppeteer who hires a Taiwanese film student named Song (Song Fang) to take care of her son while she’s at work. As Song begins to bond with Simon, we also are privy to Suzanne’s problems with her boyfriend and her tenant, who’s late with his rent.

Meanwhile, the red balloon, which has escaped the clutches of another little boy, floats around Paris, taking a trip on the subway, edging the frame as Song and Simon traverse the city, finally perching over the top of the window of Suzanne’s apartment, almost like another character in the film. As a symbol (though one is hard-pressed to say of what), the red balloon doesn’t really work. Worse, it highlights the dullness of the story that it’s wrapped around. Binoche—at her most overwrought—gives a dreadful performance, while Fang and Iteanu give very flat ones.

At its most laughable, the balloon, which ought to have deflated by now, keeps popping up in every second scene. One starts to wonder why Hou even bothered with this film. Even his usually lovely and effective long takes come across here as merely gimmicky, illuminating little of real emotional import. Hou’s films can be tedious or, more often, sublime. Le Voyage de ballon rouge is merely banal and trite.