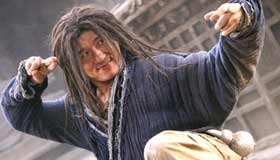 Skeptics of the “too little, too late” mentality will almost certainly be swayed to the “better late than never” camp by this historic and enormously entertaining pairing of Jackie Chan and Jet Li, the two martial arts and action film titans whose efforts in both Hong Kong and Hollywood are widely credited with having helped rejuvenate and legitimize kung fu cinema throughout the world. Paying fond homage to a litany of classic Hong Kong films from the Shaw Brothers era of the ’60s up through the Hong Kong New Wave of the ’90s, all slickly encased in a classic Wizard of Oz / Chronicles of Narnia frame story, The Forbidden Kingdom treads its path just right to please genre and action/adventure fans on both sides of the globe.

Charisma more than compensates for the half step the two stars have lost with age, though by conventional American action star standards, neither Jackie nor Jet is anywhere close to running on empty. The story begins in the present day and centers on an introverted teenager named Jason (Michael Angarano) who finds refuge from an otherwise unspectacular life in the fantastic worlds of Hong Kong swordplay spectaculars. When an ancient staff is entrusted in his care, he is magically transported into that very universe, where he must work with a raggedy vagabond named Lu Yan (Jackie Chan), a “Silent Monk” (Jet Li) and a lethal young female revolutionary known as Golden Sparrow (Liu Yifei) to return the staff to the legendary Monkey King (also Jet Li) and end the tyrannical reign of the evil Jade Warlord (Collin Chou). Throw in an archetypal white-haired witch (Li Bing Bing), the dazzling choreography of Yuen Woo-Ping (who directed Jackie Chan in his first two major successes more than 30 years ago), eye-popping production design and glistening Peter Pau ( Crouching Tiger, Hidden Dragon ) cinematography, and the stage is set for one of the year’s most resolutely entertaining efforts.

Admittedly, it’s a far cry from Jet and Jackie’s best Cantonese-language hits, and the Karate Kid subplot is anything but subtle, but the novelty of the historic pairing, particularly when executed so adeptly, makes its shortcomings easily forgivable. Credited director Rob Minkoff ( The Lion King, Stuart Little ) seems keenly aware of his limitations, doing his level best to integrate the extensive effects work while leaving his esteemed Chinese collaborators and actors all necessary latitude to deliver the rest. All of it, however, would be for naught if not for John Fusco’s surprisingly smart screenplay, which thankfully steers clear of the clichés and condescension that so often creep into Hollywood-produced films of this sort. A lifelong martial artist and martial arts film fan, Fusco’s familiarity with, and respect for, the genre is evident, setting a tone which Minkoff and his technical collaborators very wisely strive to uphold throughout.

While some will invariably focus on what this film might have been had it been made 10 or 15 years ago when both stars were in their prime, it’s hard to imagine any such pairing working better than it does here thanks to an alignment of talent, both behind and before the camera, that never seems to miss a beat.

Bring on the sequel.