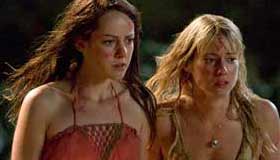 It’s surprising Paramount didn’t think well enough of this film to screen it for critics in the major markets because this relatively by-the-book genre fare is really quite good. Based on the book of the same name (with a script penned by the novelist Scott B. Smith), this story of American tourists trapped at an unholy set of Ruins in Mexico does feature the occasionally stodgy moment but it makes up for these doldrums with some memorable gore and disturbing visuals. Box office should be high, attracting even non-horror fans.

Recent college grads Jeff (Jonathan Tucker), Amy (Jena Malone), Eric (Shawn Ashmore) and Stacy (Laura Ramsay) are vacationing in Mexico, where the lazy ladies prefer the margarita-laden poolside to the countless cultural sights the boys might like to attend. When a relaxed but alluring German traveler named Matthias (Joe Anderson) tells the four that his brother’s gone off to some lesser-charted set of ruins with a girl/archaeologist they all decide to embark on a more “authentic” adventure. They’re warned off the trail, of course, but eventually pay their way to the site, where they find screaming hoards of Mayan locals who want them to get away, but express this desire by pinning them to the ruins with commands (barked in a language they suggest is “Mayan”) and weaponry. Sure, this is perfectly mundane melodrama. Almost as pat as the last-minute addition of a Greek tourist whose name could just as well be “dies to prove the situation’s dire” (you can spot him a mile away), but no one buying a ticket for The Ruins is really expecting subtlety.

Really, the things that will inspire our surprise are the film’s moments of graphic injury—seldom resulting from fighting or struggle. Much of the gore is born of oddly generous actions: Jeff has to care for Matthias’ wounded legs—gore ensues. Under-the-skin crawlers are a beloved horror visual, and the means by which Stacy (the film’s only non-reprehensible female character) rids herself of them is  something not to think of when cutting vegetables.

Direction by Bugcrush director Carter Smith is very strong, emphasizing slow discovery over more hackneyed “boo” tactics (seldom employed here). Script and direction also do some nearly stealth things in the realm of the political. When leader and future med student Jeff shouts, “Four Americans on vacation can’t disappear in a foreign country,” the subtext is made plain. The greatest of the dangers that befall the crew befall the European travelers first (think poor Greek guy), and the larger percentage of horrors that befall the central team of four are made worse by their own attempts at “helping.” Hm, could this be a possible comment on American foreign policy?

Well, perhaps that’s a bit much, but such actions can’t help but be tinged by their surrounding political contexts. Tourism can’t help but look a little like post-colonial conquest with mixed drinks, at least, not in a film like The Ruins.

Though commentaries on politics, nature and evolution arise, the film doesn’t push them too hard or far as such might detract from the slow building bedlam—which is strikingly satisfying. And that’s really the goal of the show, which the ending suggests, could become the Señor Frog’s of the horror genre.