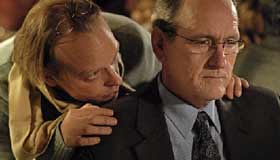 Actor/director Tom McCarthy’s follow up to his award-winning debut, The Station Agent, avoids any notion of a sophomore curse by being an even more polished effort than his debut. Film places the director firmly within a particular milieu for which he apparently has a refined sensibility: the poignant, insightful, quirky, character-driven (as opposed to star-driven) drama of note. If critical response to date, including this review, is any measure, Agent -ish numbers may well follow.

For The Visitor, McCarthy engages the talents of veteran stage and film actor Richard Jenkins, whom you’ll certainly remember as the stoically deceased father in the HBO series Six Feet Under. Jenkins is Walter Vale, a self-contained man, noted economics professor and grieving widower. When he returns to his Manhattan apartment for a conference during which he plans to take credit for a paper he didn’t really write, Walter finds his long empty apartment occupied by a young African woman, Zainab (Danai Gurira), and Syrian man, Tarek (Haaz Sleiman), who’ve been offered the apartment under false pretenses.

What happens next is not so outrageous as it might seem: Walter invites them to stay. This glorious notion is the catalyst for a number of events, some infuriating or even tragic, and others so uplifting as to make one glad to be a human (in that Station Agent kind of way). The loveliest of which is this one act of kindness offered by a man (Walter) so utterly disconnected from the world as to be happy for a connection to these total strangers under even the oddest circumstances. This connection is deepened through a sharing of their collective stories over time (as one tends to be able to do with strangers), several of the events alluded to earlier and the drum. Tarek is a drummer and, though he doesn’t know it at the beginning of the film, Walter is, too.

Oddly—or perhaps not—as an actor, McCarthy is known for playing unassuming characters not terribly unlike his protagonists in The Station Agent and The Visitor, inward and thoughtful, belying a certain charm, sense of humor and sense of adventure. As did Peter Dinklage in The Station Agent, Richard Jenkins conveys all the same sensibilities. It’s as if, in a good stiff wind ,Walter might break. Then, slowly, with sureness and motivation, McCarthy massages the character into something pliable again, something alive. What a lovely notion, indeed.