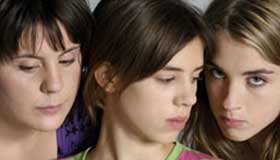 As so often happens with foreign-language movies, the English title for this intriguing French drama is more about soft-sell marketing than accurately describing the film itself. The French title, Naissance des Pieuvres, literally translated means The Birth of Octopi, a more accurate description of what is easily one of the slipperiest teenage coming-of-age dramas in quite some time. If targeted smartly to arthouse audiences, rewards should be handsome.

The French have long excelled at probing the tumult of growing up, with Truffaut’s Antoine Doinel films—most notably The 400 Blows —deservedly considered the genre’s grail. Writer/director Céline Sciamma’s film doesn’t quite rise to that level, but her exploration of three very different adolescent girls, their emotional travails, sexual struggles and strained relationships with each other resonates with such profound honesty that it’s hard to imagine anyone—male or female—not seeing themselves somewhere in the tapestry.

The nexus for these relationships is a local swimming pool in a Parisian suburb where the local synchronized swimming team practices. The team itself creates a caste system of sorts—those who can, can’t and wish they could. Marie (Pauline Acquart) is bookish, restless and underdeveloped for her age, though her hormones rage just the same. Blonde Floriane (Adele Haenel) is the object of every male’s affection, a skilled swimmer and athlete but incapable of emotional or sexual reciprocation. Marie’s best friend Anne (Louise Blachere) is homely, awkward, overweight, immature and profoundly insecure. As if matters weren’t complicated enough, Anne gets Floriane’s frustrated sloppy seconds while Marie develops a sexual attraction for Floriane.

Whatever superficial resemblance the young women have to lilies is overshadowed by the emotional tentacles that reach into every crevice of their troubled lives and relationships—adolescence is painful, even tortuous, but this summer’s rites of passage will enable them to develop the tools, skills and strategies with which all children eventually pass agonizingly into adulthood.

In her debut as a director, longtime writer Sciamma shows remarkable ability with her young actresses, extracting more truth from their performances in private moments than in those when they interface with one another. Looks and body language often say more than words, yet never so much as a smartly timed tear. Unlike American films of the sort, however, there is nothing nostalgic or consoling here—growing up just plain sucks in the worst possible way, leaving scars likely to substantially taint one’s relationships well into adulthood. The point, then, of sadistically forcing an audience to relive such torment at the cost of a movie ticket? Perhaps Sciamma wishes to remind her audience of the baggage too many of us still carry—the proverbial tentacles with which we are forever linked to our past.