close
Pseudoscientific claptrap comes across as all wet 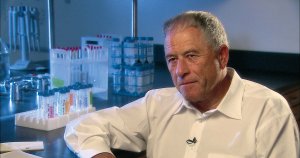 “It’s incredibly obvious, isn’t it?” Brig. Gen. Jack D. Ripper (Sterling Hayden) declared in Stanley Kubrick’s Dr. Strangelove. “A foreign substance is introduced into our precious bodily fluids without the knowledge of the individual.” Swilling grain alcohol and rainwater, Ripper revealed his mad delusions about “the international Communist conspiracy to sap and impurify all of our precious bodily fluids” through the fluoridation of water to an increasingly horrified Group Captain Lionel Mandrake (Peter Sellers) as a rationalization for the unilateral nuclear attack on the Russians he has set in motion.

The theories expressed about the most common substance on Earth in Russian writer/producer Saida Medvedeva’s Water seem no less loony. Unfortunately, this is not a satire like Dr. Strangelove —it’s a documentary in which talking heads spout pseudoscientific claptrap that comes across as all wet. Seems to be on some level a disguised infomercial for H2Om—a product developed by co-star Masaru Emoto, a veteran of Intention Media topper Betsy Chasse’s What the Bleep Do We Know?! franchise. Expect extremely soggy theatrical receipts.

A basic scientific error in the opening narration for the documentary, in which water is misidentified as an “element,” sets the tone for ridiculous assertions to follow. Central concept here, basically, is that “water has memory” and is capable of recording information—including human emotions—in its molecular structure. (That’s right: water is made up of molecules comprised of two elements, hydrogen and oxygen. Thanks, Science 101.) Because we “pollute water spiritually” (and because passing through the right angles of municipal pipes somehow “breaks down” its natural structure), it is “devitalized and rotten” by the time it reaches us. And because our brains are “85 percent water,” this changes our behavior in negative ways.

Throughout, vague generalities are introduced with phrases such as “scientists say” and “modern science maintains” and backed up by simplistic experiments such as whether an animal prefers spring water imbued with “natural energies.” That seems like hard science, however, compared to Emoto’s “experiment” in which three laboratory beakers of rice were soaked with water. Over the course of the experiment, the first beaker was told “thank you” everyday, the second was told “you’re an idiot” and the third was utterly ignored. At the end, we are told, the contents of the first beaker smelled pleasantly fermented, the second had turned black and the third had rotted.

“Dr. Emoto,” the narrator intones, “feels that this experiment provides an important lesson, especially with regard to how we treat children.”

From that, Water stumbles through some nonsense about how “ intention can be imprinted on the water” (conspiracy theorists might take note that the pic is distributed by Intention Media and that Emoto’s H2Om is marketed as “water with intention “), which is related, we’re told, to the Biblical abilities of Moses to part the waters of the Red Sea and of Jesus to walk on the waters of the Sea of Galilee.

One imagines that even Brig. Gen. Ripper might have shaken his head at this Bleep?!.