Where in the World is Osama Bin Laden? 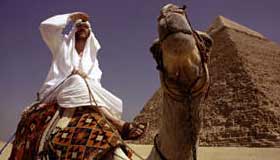 The self-indulgent Merry Prankster-isms of the Michael Moore school reach a new low in Morgan Spurlock’s smug, superficial and deceitful Where in the World is Osama Bin Laden? Imagine, if you will, Moore’s Roger & Me remade as a globetrotting travelogue, with Spurlock in Moore’s role as the hapless investigative journalist trying to score a difficult interview, and Osama Bin Laden as nefarious and elusive then-GM-president Roger Smith. Moore had a shot at landing the White Whale in his influential leftist Moby Dick, so there was a certain giddy suspense in watching him blunder his way toward Smith across the economically devastated Michigan landscape he blamed Smith in part for creating. Though Spurlock pretends otherwise, he knows he will never get near the subject of his rather meandering quest, and watching him mount an expensively produced, entirely touristic vision of the Middle East and then punctuate it with extravagant computer animations, arch editorial cartoons and lengthy voiceover homilies of the “can’t we all just get along” variety is an excruciating experience, made all the more torturous by Spurlock’s witless joviality and depiction of himself as brave and heroic and other nice things for which he offers not much supporting evidence.

The film’s essential technique is to go to a Middle Eastern trouble spot, find a journalist who agrees with Spurlock’s spectacularly pedestrian analysis that things are bad and economic issues and stifled political freedoms are root causes, and then ask random strangers if they know where Osama Bin Laden is. Most people laugh in Spurlock’s face. A few say things like “Pakistan.” Wow, Spurlock says in narration. I think we’re getting closer.

The limits of Spurlock’s technique are especially visible when he decides to visit a Hassidic Jewish community in Israel. The Hassidim (whose customs and beliefs are never even slightly explained) are outraged by Spurlock’s questions and camera crew, and they drive him out with shouts and curses, causing a police incident, and allowing Spurlock to present himself the way he likes to: As a risk taker in a trouble zone. The only thing resembling a weapon anyone brandishes at him is a black fedora hat.

The problem is that, emotionally, this scene tips the balance of Spurlock’s argument toward the Palestinian side, even though we haven’t even heard from a countervailing Israeli voice (he does interview one Israeli commentator who says “A two-state solution is inevitable,” another adventure in obviousness presented as political profundity). Like so much of this lavish home movie, Spurlock’s confrontation with the Hassidim is a completely anecdotal moment, and it reveals nothing significant about the volatile world Spurlock’s traveled halfway around to photograph except that some of its inhabitants don’t trust the media. But because Spurlock frames his movie in cult-of-personality terms and makes himself the protagonist, the fact that Our Hero has been yelled at makes villains of those who confront him.

By the time Spurlock gets to the really dangerous localities like the badlands of Pakistan and Afghanistan, he’s alternately palling around with the U.S. soldiers whose presence he decries and hiding in his hotel room bloviating into a webcam. By this point, in a frantic attempt to provide some drama, Spurlock is resorting to his old Super Size Me “documentarian as subject” duplicities, in which he gets to be Schrödinger, the box the experiment takes place in and also Schrödinger’s cat. We are suddenly in diary mode, with Spurlock telling us in direct address how dangerous everything he’s doing is—a blunt approach, but necessary, because despite all the gamer computer animations that show Spurlock facing off against a kind of Mecha-Osama, we probably wouldn’t know if Spurlock didn’t tell us that there’s anything real at stake.

When Spurlock whimpers about how he misses his wife, and how terrible it is that she’s experiencing the last stages of pregnancy and he’s not there to be with her, you want to shout at this self-pitying tourist that, unlike the Pakistanis, the Afghanis, the Palestinians and Israelis, Spurlock isn’t trapped in a danger zone. He is perfectly free to go home, and the problems of the people he’s so merrily accosting with a question he knows they can’t answer are a lot deeper than whether or not they’ve chosen, like he has, to skim across the surface of somebody else’s world with the random thoughtlessness of a small stone skipping over a vast body of water, grasping none of the depths beneath.

If Spurlock really wants to know why so many people find it hard to be friends with today’s America, it’s partly because of paternalistic spews like this one. In its fiscal extravagance, unthinking self-righteousness and fundamental narcissism, Where in the World is Osama Bin Laden? is a nearly note-perfect anthem for virtually everything about American policy it seeks to critique.