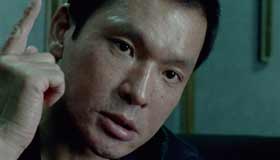 The lot of shoot ’em ups and vigilante thrillers imported westward heretofore often futilely paint Japan’s crime syndicate (known as Yakuza) with a sinister brush. Aside from a dalliance with a dame or a soul-searching sojourn, the gangster is all nails. Clearly, the maker of this documentary is on a mission to dispute the big screen’s misguided persona and wander Tokyo without an agenda. Somehow, and through many a sweetened pitch over the 18-month shoot, access inside the inner workings of one sect known as Kumagai-gumi is granted. It’s uncanny. We encounter devotees ranging from the misguided youth-turned-apprentice hoping to earn his stripes to the rich psyche of “the boss,” Mr. Kumagai, a leader who walks the Earth with swagger but peels this macho veneer away with every introspective encounter. Expectations to see guts and gore are quickly foiled. Instead, the story delves into mundane operations that prepare the soldiers to go out and do what they do. Juggling restraint and boldness to tackle this subject on many unexpected layers establishes this work as a brilliant effort. In turn, the it should draw solid numbers of stub holders from all walks who are willing to experience the wow effect through the power of suggestion.

From the first, Jean-Pierre Limosin takes to his subjects with a narrative feel. The cameras are all on-point, the sound is crisp and secure. It’s as if the film crew is doing all this magic in absentia. And there is a very close consideration to the fringe elements that shape the context, the searing minutia. Wires above the cooped-up metropolis sizzle with a hum, we see the literature read over someone’s shoulder on a subway, the bald spots and grease on the mouths that have yet to be dabbed by a napkin. Anything goes.

Our guide in the beginning of the film is a 20-year-old doughy, pockmarked slacker named Naoki who is drifting closer and closer to Loserville. When his mother has lost all hope (she refuses to go on-camera, by the way), she turns to a friend who suggests the Kumagai family to lasso the straying youth from oblivion. And soon enough he’s bowing before a man who is decked in a tracksuit exuding a Vito Corleone prowess that shows who’s boss. He brings the kid on board, requires he get a haircut and warns he might be exposed to things that are “not all positive”.

As an underling, the young apprentice cleans the home, prepares the supper, meticulously bows when he serves tea, and he even scrubs the storied tattoos covering the naked backs of many of the higher-ups in the shower room. At one point the novice is having a drag with a fellow clan member and admits he’s stressed. As we drift deeper into Naoki’s progress, he soon absconds and the film segues from youth metamorphosing into hard criminal to being more about the organization’s survival and its sacred code.

The power of this film literally resides at the top. The boss is a patriarch and philosopher who has been taught the ways of Yakuza and must take all his strength and prospect a new breed of loyals through tough terrain. Modern times and the ADD generation, which wants its hip-hop music and seems to resist being bogged down with structure and tradition, poses a serious threat to keeping the institution intact. But the boss adjusts tactics. For instance, when Yakuzas want out, he no longer orders their pinkies removed, as was the custom before.

Particularly fascinating are the interviews captured in the carefree open air. Walking along the Tokyo streets like a famous diplomat, the boss talks straight to the camera, breaking the fourth wall and almost inventing a fifth. At one moment, he reiterates a pact made with the filmmaker about not crossing a line and keeping secret “what happens on the other side of that line.” But the viewer is getting the same dose.

There are no frills in this film. The dénouement stirs more questions than answers. And yet this is a fascinating place to be in. The story goes on sans the dirty deeds that certainly must be going on while everybody is scrubbing the floor and tearing their eyes while mincing onions.

There are a few moments where the effects of malfeasance come to the fore. One of the members is pinched for assault and battery, another for racketeering. Not a punch is thrown or trigger pulled, but we do get front and center in the magistrate’s office to talk turkey about charges. The boss (wearing specs) is there without anybody else around him, concerned like any father whose child is facing hard time would be.

The voyeuristic quality of the film must be given extra stardust for edging ever so close. The boss is a torn character who is perhaps the most vulnerable. One scene has him confessing about his failures and how he “lost everything” and the camera is focused on the desolate beach behind while he is almost a blur. You feel the welling eyes without seeing them. The intimacy and trust achieved here are for the ages.

As with most films, the characters will go on after the cameras and crew turn back, but you can sense that there was more accomplished in this film than just a peek through the window of this lifestyle. As the police crack down and tighten their authoritative rope, the boss admits that his species is shrinking. He says, “We are not choir boys. We do sometimes resort to violence.” And for this you know there are things that go down that cannot be excused nor empathized. Fact is, not only is the violence amiss but the victims of it are never on screen either. Does this film then revere gangsters instead of abhor them? The audience is not charged with the duty of ruling either way. The people portrayed here, from the heavyweight boss to the scared wife whose husband is going to the clink, are human beings who live in the shadows and are tested with everyday rigmarole like the rest of us. Having the guts to refrain from the obvious and expose the complex in the ordinary is to be cheered.