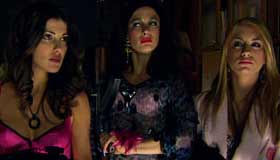 But this surprisingly well-read exploitation up-and-comer—who also served as the screenwriter and cinematographer—tries to accomplish something more here, something that his clumsiness behind the keyboard and the camera prevent from materializing. Lee fancies his script an adaptation of Eugene Ionesco’s (notice the on-the-nose shout-out of naming his antihero “Ian Essko”) Theatre of the Absurd drama Rhinoceros, an indictment of the culture of conformity that convinces almost all of the residents of a small town to transform themselves into—you guessed it—rhinoceroses. In Zombie Strippers, which is set in a small town named “Sartre,” the culture of conformity convinces almost all of the dancers at an underground gentlemen’s club named “Rhino’s” to transform themselves in into—you guessed it—zombie strippers.

Lee also sees himself as a political satirist, as it is the administration of a somehow-elected-to-a-fourth-term President George W. Bush that creates the “chemo virus” designed to reanimate sufficient dead soldiers to keep fighting the commander-in-chief’s endless wars. When an infected soldier escapes from a secret research facility, he stumbles into Rhino’s and promptly rips the throat out of star stripper Kat (Jameson). Ian is distraught—until, that is, Kat rises from the dead and shambles back to the pole.

“Hey, do you think this is such a good idea?” the hesitant DJ asks his boss before cuing up the music. “Wasn’t that bitch dead a minute ago?”

When Kat takes a customer backstage after earning a standing ovation, and devours the dude, they get their answer.

With its absolutely awful special effects and (un)dead-on-arrival dialogue, Zombie Strippers is laugh-out-loud hilarious. Call it unintentional-intentional-unintentional humor: Lee presumably believes that he’s satirizing the unintentional laughs inherent in no-budget genre fare, but does so in such a shoddy manner that the audience is laughing at him instead of with him. Especially when it comes to his efforts to incorporate commentary on existentialism, such as when the undead Kat resumes reading her dog-earred volume of Nietzsche backstage and declares, “This makes so much more sense now.”