close
Summer charming only in fits and starts 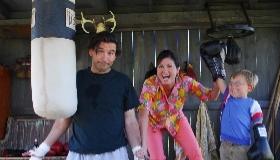 More endearing, perhaps, for the story behind the movie than for what actually ended up on screen, the fact-based A Plumm Summer nonetheless resurrects the kind of sweetly innocent charms that were once commonplace in live-action family films throughout the ’60s and early ’70s. And though it never manifests that charm in anything more than nostalgic fits and starts, it’s a brave and laudable effort that should, with careful marketing and cautious platforming, generate some very healthy word of mouth.

The setting is Montana, 1968, where local television personality Herb McAllister (Henry Winkler) and his puppet, Froggy Doo, have become serious hometown celebrities. Even idyllic settings have their dark corners, however, and the bizarre theft—or kidnapping—of Froggy Doo brings a sobering reality into the life of a socially awkward 5-year-old boy named Rocky Plumm (Owen Pearce). Shattered by the crime, Rocky and his elder brother Elliott (Chris J. Kelly) eventually team with the fetching new-girl-on-the-block, Haley (Morgan Flynn), to solve the mystery.

The story mechanics don’t always work—the film vacillates between feeling heartfelt and clumsy—but what debut director Caroline Zelder lacks in story sense, she more than makes up for in earnestness, maintaining an endearing sense of sweetness without ever falling into the maudlin. Fine narration from Jeff Daniels and memorably restrained work from William Baldwin and Lisa Guerrero as the boys’ parents, along with an excellent Henry Winkler make for a surprisingly solid overall cast.

What makes the entire affair somewhat more moving than it might otherwise have been is the fact that it almost wasn’t. Guerrero, a popular Los Angeles broadcaster who auditioned for the part before its financing fell apart, eventually stepped in with her husband, former Minnesota Twins pitcher Scott Erickson, to provide the means to see it completed. Such fairytale endings aren’t exactly infrequent for independent films, but they’re virtually unheard of for independent films of this nature, making A Plumm Summer something of a small miracle in several noteworthy ways.

Whether or not it wins over the legions of entertainment-starved families who have long mourned the absence of such films isn’t really in doubt—so long as distributor Freestyle Releasing has the patience, and the means, to help them find it.