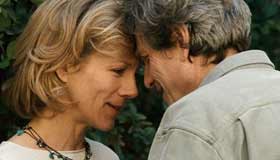 American lead actresses on the wrong side of 40 have limited options, and broad, high-profile romantic comedies tend not to be one of them. (God forbid Katherine Heigl would be old enough that her 27 Dresses be wedding dresses, not bridesmaid dresses.) So let’s at least applaud the idea that Canadian Joan Carr-Wiggin’s sprightly, but inconsistent, sophomore effort is toplined by veteran (read: “old”) performers from England, Turkey and Indonesia, with the only American a goofy, puzzle-obsessed husband who suffers more than anyone in the film. But this combination of Same Time, Next Year and Shirley Valentine is not for men. It’s female wish fulfillment for the pre-menopausal crowd and for those wondering what happened to those lush, romantic dreams of yore. Older folks in the mood for a movie not featuring a superhero will give this counterprogrammer a lift, although cable and DVD sound like more lucrative possibilities.

Carr-Wiggin doesn’t have the chops to pull off a romantic farce, but she’s so game for the attempt that we patiently wait for the movie to steer a steadier course. She has chosen a formidable heroine in Juliet Stevenson (so memorably weepy in the late Anthony Minghella’s Truly, Madly, Deeply ). She plays Julia Reynolds, a Seattle librarian vacationing with husband Jack (Daniel Stern) and their daughters on the Mediterranean island of Malta. Jack is content to sit in their rental villa and do jigsaw puzzles, which is fine, because Julia has a secret agenda. She’s in Malta for a date she made 25 years ago with her first love, a Frenchman named Alex (Tcheky Karyo) with whom she hasn’t spoken in a quarter century. While it sounds romantic, Carr-Wiggin, who also wrote the screenplay, doesn’t really have romance in mind. Sure, there are beaches and kisses and declarations of love. But in combining them with a dollop of screwy comedy and a dash of wistfulness, she creates an odd mixture.

Before long, the minor contrivances pile up, like the waiter who keeps Julia and Alex from their long-awaited reunion, and the flustered Julia who neglects to tell Alex she has a family. Indeed, what should have been a light dusting of harried humor becomes an overreliance on Julia’s frantic reactions. And when the long-lost lovers’ mutual feelings reignite, Carr-Wiggin also can’t resist making Julia’s hemming and hawing a bit annoying. Sure, Julia has a right to her agita. Alex has been married four times since they last saw each other, and his appetite for Julia is so unrestrained that they’re reduced to hiding under the bed so her daughters don’t catch them together. Nevermind that such chicanery merely grinds the gears of the movie’s over-designed comic machinery.

While Julia is confused by the resurfacing of buried emotions, Alex, ever the Frenchman, has no such thoughts. He reminds her of their previous love and the artistic life she planned for herself. Soon she’s contemplating leaving Jack and running away with Alex. For Carr-Wiggin, it’s a tricky balance: She can’t make Jack a monster, because then Julia’s choice would be obvious. But he can’t be a saint, which would make her selfish for ditching her family. In the end, she finds a shaky middle ground, which is a shame because the movie pays generous attention to Jack, sending it on a course that’s, thankfully, not as obvious as it could have been. After Julia admits to her affair, Jack marshals the remainder of his mojo, buys a dapper, cream-colored suit (with matching hat) and hits the town for some revenge sex. He finds a possibility in fortysomething, hot-to-trot salsa dancer Grace (Valerie Mahaffey), whose slaphappy energy harkens back to a ’70s Neil Simon comedy. But Carr-Wiggin’s characters don’t have the effortless humanity of Simon’s flawed, funny creations. These are the characters of a middle-aged fairy tale. Granted, it’s not a bad one, and it’ll satisfy its intended audience. But the principles (professionals all) have been directed too broadly. To write a comedy means you have to direct a comedy, and that can be tougher than abandoning your family for the faded promise of the road not taken.