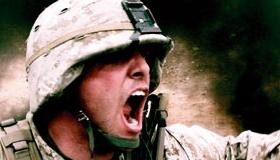 British writer/director Nick Broomfield won’t win over many hearts and minds with this bracing docudrama about a tragic episode in the ongoing occupation of Iraq. Although technically proficient, Battle for Haditha amounts to overkill and leaves no room for interpretation or analysis. Since every significant character is like a lamb brought to slaughter, viewers can only recoil. We can’t glean anything beyond truisms such as “war is hell,” “violence begets violence,” “Iraq is a quagmire,” and “the U.S. military was ill prepared for the challenges it would face.” Those are important points, if they come with clarification—some potential to deepen our intellectual and emotional understanding. Earning potential is limited, mainly because it’s only opening in one theatre in NYC, but also because Broomfield shuts down the opportunity for give-and-take between his movie and the audience.

Broomfield restages the events of November 19-20, 2005, when a U.S. Marine patrol was hit by a roadside bomb in the city of Haditha and retaliated by killing 24 people, most of them civilians. We see the episode from the Marines’ perspective as well as the point of view of the two locals—a father and a DVD store clerk—recruited by insurgents to plant the device and the Iraqis mowed down in their homes. The latter group includes two star-crossed lovers and many women and children. The bomb explodes at the 60-minute mark. The ensuing violence doesn’t take long to depict, leaving time to glimpse how various parties react. The squad leader (Elliot Ruiz) gets promoted and is later consumed with guilt and anger. His commanders initiate a cover-up. The insurgents use the massacre to rally their followers, and the women of Haditha wail in mourning. Broomfield stops short of having Donald Rumsfeld dance a jig.

The aggression displayed by the Marines (a number of whom were tried in military tribunals stateside) is matched by Broomfield’s blunt approach to the subject matter. Craft-wise, his technique is impressive. The graphic action is well rendered (in Jordan) and the acting, much of it by non-professionals, feels more authentic than the performances in Brian De Palma’s Redacted. Yet despite the fact the script was improvised after extensive research using official accounts and first-person testimonials, the dialogue sounds canned. Each of the excessively self-aware characters says just what you’d expect; they express their motivations in speeches that leave nothing out or indeterminate. Broomfield makes it virtually impossible to read the material any differently than he presents it. The pitfall of docudrama is glaring: “Fact” stripped of the transformative power of fiction.

Rather than highlight the humanity of the situation (as he claims to be doing), Broomfield bludgeons us with the obvious and we shut down. Battle for Haditha isn’t numbing in the way he intends, in a manner that underscores how inured Americans have become to the violence conducted in their name. By trying so hard to make this event emblematic of the Iraq conflict and war in general, Broomfield temporarily defuses our capacity to learn anything, along with our capacity for constructive outrage.