close
Sivan's Before The Rains on par with past work 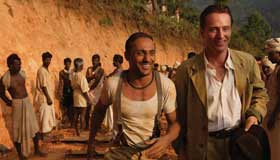 A gripping story of forbidden romance set in 1933 colonial India, filmmaker Santosh Sivan’s Before the Rains is every bit as engaging as his astounding 1999 thriller, The Terrorist, while equaling the boundless melodrama of his 2001 epic, Asoka. The latter is not always a good thing—melodrama is inherently grating and occasionally grates here—but given the film’s undeniable beauty both in location and the personage of lead actress Nandita Das (and, frankly, its strikingly relevant social commentary about sex, nationalism, empire and occupation), one cannot help but be captivated by what one might called a timeless “real film” of the sort production company Merchant-Ivory has become known for over the last three decades. Box office prospects are respectable due to both the boutique cache of the M-I moniker and the fact that it’s a foreign film that is nevertheless in English.

Linus Roache’s Mr. Moore is a local bureaucrat in British-occupied India, married and with children. While his wife is traveling, he embarks on passionate affair with his beautiful, rebellious housekeeper Sajani (Das), of which his manservant, T.K. (Rahul Bose), becomes aware. Sajani is also married (though it is a traditional arranged marriage), so this is no small concern. When the affair is revealed, Sajani, Moore and his family, the men and woman of the village and his trusted servant become caught up in a struggle that runs much deeper than the simple betrayals of the heart. Here, notions of tradition in wildly disparate cultures are at issue. Matters of local modes of justice and even trade are at stake, let alone the lives of at least Sajani and the Moores themselves.

Director Santosh Sivan generally serves as has own cinematographer and most certainly has the sensibilities of an artist behind the camera. With actors working in period English and a script (by screenwriters Cathy Rain and Dan Verete) that can be presentational, and, occasionally just plain bad, he is less adroit.

No matter. Here is a movie that the late Ismail Merchant would have been happy to have under the Merchant-Ivory banner. James Ivory is very much alive and working, and one assumes he approves as well.