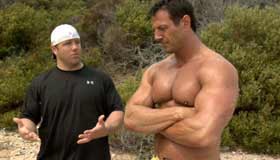 The muscle mass is evenly distributed across Christopher Bell’s oversized documentary about steroids. Asking scads of pertinent social, medical and ethical questions, he addresses the issue with honest comprehensiveness while engendering skepticism as to whether steroid use ought to be demonized and treated as a scourge. Parents who want to keep their children off the juice are advised not to let them see this movie; the doubts raised will only confuse 90-pound weaklings desperate for attention and respect. Then again, who’d want to look like those obscenely bulked-up folks on screen?

Poughkeepsie, N.Y., native Bell—a USC film school grad and weightlifter—uses his own family as a case study. His two brothers, Mike and Mark, have both taken steroids in their pursuit of football, powerlifting and professional wrestling careers, though he claims he’s never succumbed to temptation. He amusingly reviews the pressures felt by teens, primarily young male athletes. Although they didn’t know it at the time, the Bell brothers’ childhood heroes Sylvester Stallone, Hulk Hogan and Arnold Schwarzenegger were juiced-up. And learning they used shortcuts only boosted the already-strong desire not to be normal-sized.

Chris talks with many people on both sides of the issue. Donald Hooton, who started a foundation to fight steroid abuse after his son committed suicide in 2003; two U.S. Congressmen; athletes Ben Johnson, Carl Lewis and Floyd Landis; candid bodybuilders; and an HIV-positive man who testifies steroids saved his life. Bell also attempts a Michael Moore-style ambush on Governor Schwarzenegger.

More medical testimony and evidence would be helpful. Without relevant expertise, it’s hard to assess a quick primer contending steroids are merely synthetic hormones and not very different from those found in non-controversial applications. In two of his many side jaunts, Bell shows how easy it is to obtain a prescription for ‘roids (from a chiropractor) and makes a homemade batch of muscle-building nutritional supplement and packages it for retail sale. The personal drama revolves around whether his fully-grown (and then some) brothers will confess to their mother that they are users.

Broadly stated, his thesis is that in a hypercompetitive society addicted to drugs and performance-enhancers—whether Ritalin for kids or amphetamines for Air Force pilots (even Popeye took spinach)—there’s a double standard. According to one CDC statistic cited, steroids aren’t a big killer. Their ill effects are known, controllable and mostly reversible. As with any drug or supplement, a risk/benefit ratio pertains. This all makes sense as far as it goes. One could add that the controversy surrounding doping in professional sports is distinguishable though not separable from steroid use in society at large. Consistent policies that enable fair testing and enforcement within a given sport or event like the Olympics is a lay-up. And the problem of doctors and clinics illegally prescribing and dispensing steroids is conceptually isolatable: The law is the law. The subject is more interesting when considered on the individual level, which is one reason Bell is wise to keep returning to his nuclear family, fairly positioned as average.

No doubt, society is sending mixed messages. But that doesn’t excuse Bell for not pointing out that Barry Bonds’ “glass house” argument—made in a clip when he’s chiding the media during a press conference—is fallacious. Many Americans believe certain bedrock principles like “two wrongs don’t make a right” have a role to play in this arena. Since it both understates and overstates the situation, Bell’s conclusion that “steroids are a side effect of being American” isn’t terribly helpful, though that hardly undermines his entertaining and insightful analysis.

Bigger, Stronger, Faster is also valuable because it anticipates weightier debates on related topics (gene doping, stem-cell therapy and cloning) where scientific and medical innovation intersects with public and private morality. The games have only just begun.