close
Bloodline departs from the predictable 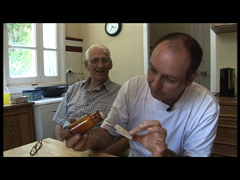 Once the first lo-fi frames move in this daring documentary, it’s a departure from the predictable dime-novel remake or horror fest that the title’s predecessors implied. Rather, in Bloodline, a crusade ensues putting the good book and the Vatican to the fire. What becomes of a filmmaker-turned-scavenger-hunter on a Pythonic quest to determine whether Jesus is a virgin who died by fantastic crucifixion or if he’s a mortal who spawned royal offspring with squeeze Mary Magdalene who then went on to rule France? And if the latter, was it all covered-up by a secret European sect? Pivotal clues are unearthed in such kismet fashion that it leaves the narrator mute—ergo it seems preposterous to accuse the production of any rigging whatsoever. Pop culture this time has finally glommed onto The Da Vinci Code phenomenon, steeping verity from the fiction leaf. Our enthusiast/narrator is more of a guide treading on perilous ground where at any moment you think he will be surreptitiously terminated by way of cerebral hemorrhage. But the camera shields helmer Bruce Burgess, playing the role as a green Indiana Jones (he looks like a hip Mario Batali-sans ponytail), as it captures the proof in bottled parchments and first-century chalices. Every disguised chitchat or Judean relic lunges him closer to something far bigger than the project. Such unparalleled revelations deposed front and center render the picture a gem that unpretentiously swings for the fences and lands in the alleyways the next town over. Fanfare will be massive.

It would have been easy for the filmmaker to heed the naysayers who were aplenty when, almost half a century ago, serious questions surfaced about whether the Vatican hid Jesus’s nuptials to Mary Magdalene and siring of a family whose traces may still exist. Modern-day cynics rule the airwaves with been-there-done-that’s, almost egging someone not paddling in the soup to prove them wrong. Burgess quips, “I’m just a filmmaker fascinated with the ‘greatest cover-up of all time.’”

The director is an amateur archeologist, a student ceding the mic to the experts—almost a dilettante who at first is just going to pursue this and see what the fuss is all about. But he wises-up quickly. Past inquisitors have found themselves six feet under. In fact, there are prospective sources that were to be interviewed that mysteriously die off beforehand. The hype is that much more intensified.

Dogma-style by default, Burgess is a soldier on the battlefield needing only the paired down essentials: cameraman, sound equipment and subject. The small troupe takes the show mobile during nervous excavations which riddle the viewer with the fear that there is something almost wrong about watching, as if at any moment Interpol is gonna come to cuff you for not blinking enough. Through it all, the doc showcases superb detective work conducted by a few maverick adventurers armed not with credentials but gusto.

Burgess and his fellow limey thrill man Ben Hammott are clever students who kept everything transparent. The embalmed tomb and other remarkable relics pieced together by bottled messages left by a priest who presided over a parrish at Rennes-le-Chateau (a small village along the south of France and rumored dwelling of Jesus as well as Mary Magdalene’s resting place) are juxtaposed with each step that got them to the holy booty. Burgess must have thought that come the film’s release everyone from the holiest to the most sinister might crawl out of the woodwork for a weigh-in quote. To scoop everybody, he enlisted ubiquitous experts in academia (some who would give their back teeth for a few minutes at the back stacks in the Vatican library), members of the Catholic Church, and some folks in between who demanded their identity be kept anonymous for fear of reprisals. One prof hits him with this caveat: “The whole world is waiting to laugh you out of the room.” The mere inclusion of such embarrassing moments where Burgess is called out and other times patted on the back deserves respect and yet the focus remains on the cause. Never does the film linger on itself. It avoids narcissistic ploys. Matter of fact, the camera begins to turn close on the director during interstitial moments only because things get too out-of-hand and a return to center by way of bedside straight talk to pull back is just what is called for here.

You get the feeling that the author wanted to end this film quickly many times. He chimed at one point toward the end, “I’ve gone as far as I can go.” Rather than sabotage the thing by draining the batteries or putting peanut butter in the camera’s gate, he kept going forward. Out of the slog comes a sort of wink-wink from a secret sect representative who welcomes the in-the-know filmmakers to this celestial kingdom. The experience is just simply a rush because you’re rolling with a breed of subject that doesn’t dilly much with the film world and the emotions combust often. Other moments are just jarring (at one point you’re hovering over an embalmed skeleton in a tomb which may or may not be Mary Magdalene—the camera casually trains right up against the teeth). Hammott admits he’s spooked. Ditto this viewer.

The true achievement may not just lie in the completion of the film alone but in pulling the curtain wide-open forcing some to question their faith and dosing a bad case of insomnia upon the Pope. The takeaway is how his bearings incite a fresh dialogue entreating agnostic and faithful alike to dig in for ages and ages.