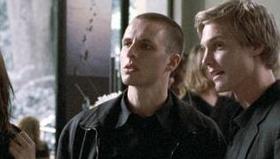 Charming, clever and well made, Norway’s Reprise employs just the right kind of meta. Something of a Bildungsroman for 23-year-olds, the film follows two best friends who aspire to publish the “Great Norwegian Novel” but only one of the two makes it. With the right marketing, this one could go far. Tone and temper are perfect for crowds willing to jump the subtitle gap, and it will likely have a good run on DVD.

We meet Erik and Phillip as they mail off their manuscripts—putting these envelopes into the mailboxes vaguely resembles jumping off a cliff—which, in an expressionistic way, is full of prickly and endearing truths. Building something the characters will later think of as nostalgia, the camera follows Erik and Phillip quickly through streets, as if destiny were some sort of conveyor belt built into Oslo’s sidewalks. Ultimately, Trier’s direction depicts a fast-moving and infinitely revisable future for the two friends. The old dictum that art imitates life is (to mix metaphors) a double-edged sword in this case. For though the realities that befall these two friends don’t vary wildly from their fantasies, the sort of glossing over that happens in their future stories carries with a romantic veneer that isn’t shared by the lives they live. One is committed to asylum, the other is published on his second try, relationships crumble, girlfriends play mother and the malaise and aimlessness so typical of one’s early 20s is exacerbated by the sheer glamour of being “an artist in Oslo.” At the same time, we’re not so sure everyone will get out alive.

The directorial debut of Joachim Trier, Reprise takes from influences as loftly as Last Year at Marienbad and as populist as Trainspotting, all the while hinting at other great European cultural influences in the worlds of literature, film and post-punk music. Intelligently, the protagonists are young men (almost post-kids) on the precipice of being “adults”—a condition they ridicule incessantly. Eventually, the old boys’ club they’ve created, the one that’s ironically hostile to girls, can’t be held onto if the boys are to cross over to their healthier, more successful, adulthoods. And this shines a funny, messy, edgy light onto the zeitgeist that inspired their works to begin with. It’s all quite imperfect, but it’s also beautiful. To see inspiration with nostalgia at their age somehow seems quite familiar and decidedly bittersweet.