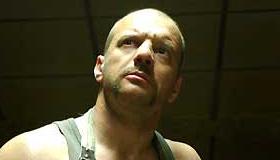 The movie begins with rioting in the aftermath of France’s election of an ultra Right Wing president, which is presented in de rigueur jittery, quick-cut style that’s no less tiresome with subtitles. Having just pulled a heist and attacked various riot cops during the getaway, pregnant Yasmine (Karina Testa) and her buff, unlikeable friends split up with plans to meet at a hostel on the border. First to the hostel are Tom (David Saracino) and Farid (Chems Dahmani), the latter a Muslim whose heritage is supposed to mean something but never quite does, even when he meets his end via an overreaching callback to the ovens of the Holocaust. The motel’s proprietors are a creepy lot airlifted from The Hills Have Eyes, (Aja’s follow-up to High Tension ), which is an obvious exit cue if you’re anyone but characters in a movie like this. Actually, most of the horrific happenings will look familiar. The dilapidated dwellings, underground tunnels, dank animal pens, rattling chains and dead bodies on meat hooks are a veritable (dirty) laundry list of tired horror tropes. That would be fine if Gens’ attempt at topicality didn’t seem so ham-handed. How else to describe the idea that the motel is staffed by murderous cannibals and inbreds and presided over by an elderly, unrepentant neo-Nazi who wants to create an Aryan race from the squalor of his torture dungeon? But if Gens is trying to connect a Nazi’s influence over a group of human rejects with the Conservative French government’s treatment of “impure” minorities and slum-dwellers like Farid and Tom, he’s forgetting that such leaps in this genre require subtlety (like George Romero’s thinly veiled assault on consumerism in Dawn of the Dead ). And it hardly helps that, with the exception of Yasmine, none of the victims are remotely sympathetic. So if Tom and company are supposed to stand in for the people (with a capitol P) let’s hope Gens himself has a more enlightened view of his countrymen.

But to analyze the movie’s politics is to give it too much credit and discount the reason Gens is really here, which is to kill people in the most gruesome ways possible. For this, one doesn’t really need a plot, so by the end it comes down to Yasmine picking off her captors while trying to escape. And once Yasmine, feral and blood-soaked, starts dodging gun-toting hot chicks and mud wrestling blonde nympho Gilberte (Estelle Lefebure), we’ve moved past horror and into the kind of fanboy fetish that maybe Quentin Tarantino could have pulled off with winking relish. But Gens’ approach is so derivative and his politics so juvenile that there’s nothing to root for. Except maybe the hope that Yasmine’s dry cleaner is good with blood stains.