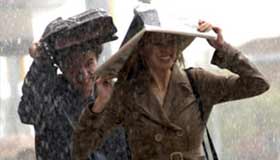 A demanding, but remarkably accomplished and moving film, Fugitive Pieces examines the lifelong impact a tragic childhood memory continues to have on a writer who grapples with its consequences, personally and professionally. The 2007 Toronto Film Festival opener now gets a domestic release and should find its share of admirers in select arthouse runs. The complex nature of the film and its deliberate pacing could limit box office success, but for those who are looking for a complex character study, this haunting and striking story is just the ticket.

Based on a bestselling novel by Canadian poet Anne Michaels, Fugitive Pieces centers on the life and recollections of author Jakob Beer (Stephen Dillane), a man who continues to be haunted by a horrifying experience during World War II in which he witnessed the Nazis murdering his parents and abducting his sister, Bella. Once he emerges (played as a boy by Robbie Kay) from the hiding place that spared him the same treatment, he is eventually discovered by Athos (Rade Sherbedgia) a kindly Greek archaeologist working at a site in Poland. He smuggles Jakob out of the country and keeps him out of sight and harm’s way at his home on a German-occupied Greek island. Once the war ends, the two end up in Canada where Athos becomes a professor and Jakob grows into a young writer and husband who marries Alex (Rosamund Pike). The haunting memories of his past and the painful questions about his sister’s eventual fate take a toll on his marriage. Burying himself in his literary pursuits, he finally meets a woman (Ayelet Zurer) who holds the key to his future happiness and the end of his quest to discover the truth.

Michael’s novel, first published in 1996, with its poetic style and strong narrative thrust, would seem almost impossible to translate to film and, indeed, the author did have concerns until writer/director Jeremy Podeswa figured out how to make this memory play visually interesting without losing the essence of the book. By making the young Jakob and his older self coexist, the film is structured in a way that allows us to see his history develop and understand how a childhood tragedy can inform an entire lifetime. If the book was about the daunting relationships between men, women, memory and history, the movie successfully seizes on those themes and manages to humanize them in a way that seems even more pronounced and effective than the source material. The cast is uniformly superb, particularly Sherbedgia, a veteran character actor who provides much of the film’s soul. Dillane is appropriately conflicted as Jakob, but could use a little more fire in his portrayal. Pike and especially Zurer have some fine moments as the women in his life, and there’s wonderful support from the two child actors Kay (as the young Jakob) and Ed Stoppard (as the offspring of Holocaust survivors who has a unique impact on the older Jakob). There can be no question the film takes its time getting where its going, but the audience’s patience is infinitely rewarded by an unforgettable cinematic experience not to be missed.