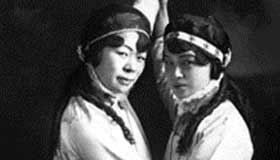 Effectively organized, TV-style film essay about the role of Chinese actors in Hollywood’s mainstream is engaging, smart and phenomenally well researched. We’ve come to expect no less from veteran director Arthur Dong, whose works since 1980 have typically revolved around sexual identity, but here they skew towards ethnicity. Hollywood Chinese is both a treatise on the condition of bi-nationalism (Chinese-American) and a look at the effect media representations has on that identity, and by proxy, others. Theatrical won’t be a big moneymaker, but the film will find a good place on TV and in academic distribution.

Dong corralled some seriously heavyweight Chinese performers from the Hollywood and Indiewood communities for this film. While the directors and writers seem like trailblazers in this history of film, it’s the actors, who all struggled to get roles outside of the generic or exotic categories, who take center stage. The actors’ struggles with the intermittently closed- and open-minded film industry follow an interesting path alongside Chinese-American audience members’ ability to see themselves as part of the broader nation. While that last topic might sound like a generalization, each artist interviewed commented upon their identity as it related to the identity of Chinese and Chinese-Americans as seen in media.

It’s ironic this culture has been under-represented because as evidenced by Dong’s research, the history lesson goes deep. In Hollywood ChineseThe Curse of Quon Gwon. Written and directed in 1916-17 by a 20-year-old Chinese-American woman named Marion Wong, the film deals with issues like the compromise of traditional values and the values of a new community. Until a year or two ago, the film was unknown. Now, due in part to the awareness raised by this film, Curse has become a restoration project, and at least in the San Francisco film community, the name is in relative circulation.

Hollywood Chinese puts its money where its mouth is in many ways. Not only does it explore an avenue of film history that’s been diligently neglected for nearly a century, it unearths proof that this culture had been living in a constantly moving shadow for far longer than most of us could have known. Though the organization of the film is dutifully essayistic, this basic, somewhat static mode of presentation affords the film a veneer of straightforward, canon-like history that the subject matter has long awaited and very much deserves.