close
A good way to spend a couple hours this Summer

How the Garcia Girls Spent Their Summer 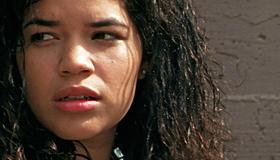 An account of How the Garcia Girls Spent the Last Three Years —the period since this assured debut from writer/director/producer Georgina Garcia Riedel premiered at the 2005 Sundance Film Festival—would also be interesting to hear, as it’s completely puzzling why another distributor didn’t take a chance on this character-driven charmer before the relatively young Latino specialty label Maya Releasing.

One suspects it might have had something to do with an unwillingness to compromise on the part of Riedel, who chronicles the languorous love lives of three generations of single ladies in a Mexican-American family with an aesthetic inspired by the slowness of the dusty desert town they call home. Despite the presence of Emmy Award-winning Ugly Betty star America Ferrera, younger moviegoers raised on a steady diet of MTV-style editing will likely grow impatient with the deliberate takes in How the Garcia Girls Spent Their Summer. Riedel’s shots are artistically composed, with the camera moving little—if at all—as characters walk through them and step back and forth across the boundaries of the frame. One can imagine another filmmaker, one with less sticktoitiveness, breaking down during the three-year wait and re-editing—losing in the process such adorable recurring bits as the Greek  er, Mexican chorus of old dudes reminiscing in Spanish about their first cars and the girls they picked up in them, which are spot-on thematically but advance the plot not at all. Though the box office prospects of How the Garcia Girls Spent Their Summer might be poorer because of that refusal to speed up the proceedings, moviegoers with the prerequisite patience will ultimately enjoy a richer experience because of it.

Riedel herself acknowledges the contrast between her film and a spicier Hispanic multigenerational love story in a scene in which cute teenager Blanca Garcia (Ferrara) and her prim yet irrepressible grandmother Dona Genoveva (Lucy Gallardo) watch a hilarious spoof telenovela in which the heroine’s lover is shot by her mother after revealing that he has slept with not only her mother, but also her twin sister. The action in How the Garcia Girls Spent Their Summer is much more understated—and involves no gunplay. A 70-year-old widow who never learned to drive, Dona Genoveva shocks her daughter—and Blanca’s mother—Lolita (Elizabeth Peña) by buying an old junker of a car and accepting driving lessons from her gruff gardener Don Pedro (Jorge Cervera Jr.). A 40-year-old divorcee, Lolita is herself deeply lonely and torn between Victor (Steven Bauer), the attractive serial adulterer who works across the street from her carniceria, and Jose Luis (Rick Najera), the chubby but thoughtful butcher who works for her. And Blanca is about to experience a sexual awakening with Sal (Leo Minaya), a bad-boy out-of-towner sent to toil in his uncle’s garage after getting a girl “into trouble” back home.

“Why’d you get in the car?” Sal asks after—literally—picking her up.

“I don’t know,” Blanca replies. “Guess I thought you could take me someplace.”

And, with the Garcia Girls, Riedel will take the right audiences someplace this summer, too.