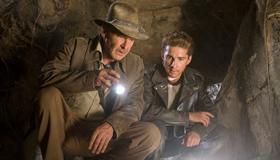 Apart from further adding to their already massive fortunes, it’s hard to imagine just what George Lucas, Steven Spielberg and Harrison Ford really expected to prove with yet another Indiana Jones film. Utterly unnecessary, unbelievably uninspired and preposterous beyond all imagination, this ill-conceived addendum to a trilogy that should have ended 19 years ago with Indiana Jones and the Last Crusade is likely to have little impact on fans other than to remind them just how far the series and its creators have drifted from their moorings. There’s no denying a certain measure of pleasure in seeing Ford once again don the fedora and crack his trademark whip, but the steady drift toward self-parody begun with Indiana Jones and the Temple of Doom in 1984 here reaches such critical mass that any vestiges of the magic first wrought 27 years ago with Raiders of the Lost Ark now feel as ancient and irretrievable as the original Ark itself.

The year is now 1957. Russians have replaced Nazis as America’s (and Indy’s) enemy of choice and the Atomic Age is in full swing. As the film begins, Indy (Harrison Ford) is once again in a pickle, kidnapped by Russian agents who have taken over a remote military installation in the American Southwest. The expectation is that Indy will help them locate a certain artifact with which the operation’s boss woman, a quasi-psychic nutjob named Irina Spalko (Cate Blanchett), will help further some kind of Soviet mind-control plot. In typically rousing fashion, Indy spoils the party and gets the film off, quite literally, to a very promising bang.

But Indy is soon dragged right back into confrontation with Spalko, reluctantly teaming up with a tough-talking, switchblade-wielding biker kid named Mutt (Shia LaBeouf) whose mom, along with one of Indy’s old colleagues (John Hurt), is being held captive by Spalko somewhere in the South American jungle. The prize this time is a revered Mesoamerican “crystal skull” which, in addition to possessing certain psychic powers essential to Spalko’s domination scheme, also holds the secret to the legendary golden city of El Dorado.

Paramount, probably unwisely, saw fit many months ago to spoil the revelation that Mutt is Indy’s son by Marion Ravenwood (Karen Allen), here returning to the series for the first time since Raiders of the Lost Ark. That leaves relatively little room for added story surprises and far too much room for elaborate set pieces which, in stark contrast to those of the original film, now look more like segments from a video game. As a result, the film itself feels less inspired by its predecessors than by such second-tier, CGI-laden Raiders knock-offs as Stargate, The Mummy and National Treasure.

That’s an obvious nod to the fanboy set on whom Paramount is counting to give the picture a big opening, though it’s questionable how well the approach will play with general filmgoers. Most of the in-jokes, in fact, are either aimed squarely at fanboys (a cheeky reference to an episode of the Young Indiana Jones Chronicles television series featuring Pancho Villa) or movie nerds (Mutt making his entrance looking exactly like Marlon Brando in The Wild One ), with little for anyone else other than convoluted archeological mumbo-jumbo meant only to move the characters from one overly elaborate chase to the next.

Such, unfortunately, are the pitfalls of film franchises that become far too enamored of their own hallmarks, the James Bond films being perhaps the most noteworthy example. The seeming need to outdo everything that has been done before, while still including a wink and a nod to certain recurring themes (snakes, hat, whip, etc.) does little but augment the very genre cartoonishness that Raiders of the Lost Ark initially sought to subvert. No wonder, then, that everyone seems to simply be going through the motions. All but gone is Ford’s exploratory zeal and Spielberg’s playful sense of exhilaration. It’s an accomplished film, but hardly an inspired one, a fact that becomes increasingly evident as the film veers toward a resolution so utterly laughable that it verges on high camp.

The root of the problem lies in the seeming need, on the part of Lucas and screenwriters Jeff Nathanson and David Koepp, to recast the story in the pop culture vernacular of the 1950s, as opposed to that of the 1930s. In fairness, there’s some understandable logic to this idea—in a nuclear-age world where manmade bombs can wreak unspeakable destruction, God’s wrath is suddenly far less impressive. At the same time, the worlds of Indiana Jones and Erich Von Daniken are not easily reconciled, particularly when the effort is as haphazard and superficial as this one.

Other contributions are equally lackluster—John Williams’ score is little more than a cut-and-paste job of previous Indiana Jones themes while cinematographer Janusz Kaminski makes no effort whatsoever to replicate the beautifully nuanced sense of period which the legendary Douglas Slocombe (now 95 years old) brought to the first three pictures. Like everyone else, they appear to be simply collecting a paycheck that a careless and undiscerning public will be only too happy to endorse.