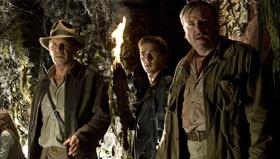 After almost two decades of procrastination, rumors, rewrites, a shroud of secrecy and plentiful speculation, one of cinema’s most enduring action heroes has returned, famous fedora and cracking bullwhip intact and showing few signs of a creaky physique.

Finally, Indiana Jones was unleashed at the Cannes Film Festival with a scrum of the world’s media fighting to get into the first screening at the Lumiere auditorium in the Palais des Festivals while plaintiff members of the public begged for tickets. Some of Indy’s action techniques would have been useful in the crunch.

So can Harrison Ford, 65, who was in his 30’s when he made Raiders of the Lost Ark, still hack it as an action hero when his mentor Sean Connery declined the invitation from the franchise’s creators Stephen Spielberg, director, and George Lucas, producer?

The answer is a resounding “Yes” even if the script leaves him floundering in places, especially a rather slow and unnecessarily convoluted start. Set in the Cold War era in the 50’s, this latest Indy flick has an appealing retro feel to it with many of the stunts (or as Ford prefers to call it “physical acting”) performed live rather than being digitally engineered.

With the first three films dealing the Nazis as villains and taking their stylistic cues from the movie serials of the forties, the latest installment casts the Russians as the baddies and owes some of its inspiration to 50’s serials.

The fact that it took such a long time to construct a script that everyone was happy with may explain its clunky beginning at a secret military installation in the desert which has been infiltrated by the Russians. Indy and his sidekick Mac (the redoubtable Ray Winstone hedging his bets on taking sides) manage to escape a close encounter with the pesky Ruskies.

Indy returns to his job as a professor of archeology at Marshall College only to find that his non-academic activities have made the government put pressure on the university to give him the heave.

As he prepares to abandon academia he meets up with Shia LaBeouf, a youthful rebel with a cause who also has a big secret in store for Indy. He inveigles Jones in to a journey to the remote corners of Peru to unearth one of the most intriguing archaeological finds in history, the Crystal Skull of Akator. Naturally the Russians are also on the trail of the Skull, which is invested with super powers and could help them in the quest for world domination.

Once the action moves to the land of ancient tombs, and a subterranean city of gold then the narrative picks up, especially during the confrontations with Cate Blanchett, in chillingly evil mode as the ice maiden Irina Spalko. She emerges as a femme fatale who fights her foes with venom yet still manages to look immaculate with scarcely a hair out of place.

Ford, in his usual laconic style, has fun playing around with the generational gap between he and his youthful sidekick (LaBeouf) while the romantic interest is rekindled by reuniting him with the great love of his life, Marion Ravenwood (Karen Allen). Although lightly sketched, the relationship is touching.

Though the film is almost critic proof in that it was made because both Lucas and Spielberg sensed a real demand from their loyal fans, the filmmakers remain prepared for a critical backlash.

Yet there is a real delight in the art of action cinema at work here, and the enormous satisfaction of being in a darkened room with someone you know can really kick butt.