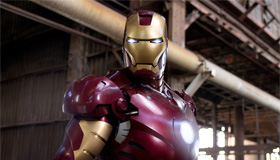 The story of a reformed munitions manufacturer who uses high-tech body armor to become a superhero, Iron Man is going to make a pile of money and establish comics publisher Marvel Entertainment at least momentarily as a major Hollywood player thanks to the company’s gutsy decision to self-produce. But the real hero in this saga is probably Jon Favreau, the comic-actor-turned-filmmaker, who has chosen to direct this picture as if it were a Wile E. Coyote cartoon starring Donald Trump.

Our comic-book heroes have been taking themselves awfully seriously onscreen of late. The Sam Raimi Spider-Man trilogy and the Chris Nolan iteration of the Batman franchise are so awash in art-directed mythmaking and in the high seriousness of their tormented protagonists that the primary power these heroes display often seems to be angst. Favreau is having none of that. Iron Man is unafraid of the ridiculousness of its pulp premise, and indeed seems to recognize silliness as a major source of a comic-book movie’s fun. From lab accidents to test flights to pitched combat, Favreau gives nearly every scene the cadence of slapstick. In Robert Downey Jr., cast here as the brilliant and cocky arms magnate Tony Stark, Favreau is abetted by a resourceful actor capable of inhabiting Stark’s narcissism without losing the audience’s sympathy, something Downey does in the most scrumptious way imaginable: by drawing on the brazen self-regard of a born movie star.

The first half of the film is the strongest, and could even be said to capture something significant about the American zeitgeist in this era of wars that have been declared over but don’t end and body counts that just seem to tick upward toward some unknowable question mark in the sky. In the film’s opening, Stark has just giddily demonstrated a new weapons system in a mythic battle zone with the unlikely name of “Gommerra” (apparently christened after an STD or the giant turtle who defeated Godzilla in Destroy All Monsters.) Insurgents attack. In the heat of battle, a high-tech mortar lands at Stark’s feet. “Stark Industries,” he reads on its flank, just before it blows up in his face.

That’s as powerful and economical an image of an America adrift in the backwash of its own power as any recent movie has achieved, and at least as profound in cinematic terms as the total argument made by films like Stop-Loss and Syriana. The fact that Stark bears permanent, life-threatening wounds from his injuries is popcorn poetry, like the Frankenstein Monster’s childlike gait, or the Phantom of the Opera’s acid-ravaged face—a living embodiment of his outsider status, and the scars his own actions have secretly built around his heart. By the time the standard soap-opera histrionics kick in, with office politics replacing geopolitics and Stark throwing over love because “there’s only the next mission,” it’s two-thirds of the way into a very enjoyable movie and far too late to screw things up.

Iron Man has its imperfections. There are too many “research-and-development” montages as Stark perfects his creation. A battalion of great supporting actors is largely wasted, including Terrence Howard in a thankless military sidekick part and a grim, improbably bearded and monotone Jeff Bridges as Stark’s evil business partner Obadiah Stane. Gwyneth Paltrow, who plays Stark’s female amanuensis Pepper Potts, has been doing a lot of press for the picture; based on the evidence, the Oscar-winning actress is basically announcing to the world her decision to become Sandra Bullock.

But it’s a genre convention that the first films in proposed franchises load up with more acting power than they need, because two movies on, you never know what kind of a big moment a character may have to pull off. And make no mistake: Iron Man is going to be a franchise, and a rather popular one, for at least another movie after this one. So kudos to Iron Man for finding novel twists on an exhausted genre, and to Jon Favreau, whose irrepressible sense of fun has for the moment managed the Arthurian feat of pulling the stick out of the contemporary comic-book movie’s ass.