close
Made ends up being better than it should be 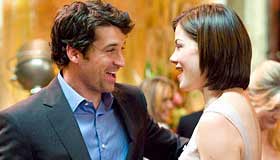 By turns both amiable and annoying, Made of Honor is the kind of forgettable, formulaic fluff at which studios ought to excel but rarely do. A quintessential “chick flick”/date film targeted squarely at twentysomethings too young to realize the shameless re-treading of 1997’s My Best Friend’s Wedding, the picture ends up being far better than it has any right to be thanks largely to a fine cast, solid direction and an unusually effective rewriting effort by Harry Elfont and Deborah Kaplan.

Patrick Dempsey stars as Tom, an inveterate womanizer who has successfully managed to divorce love, friendship and sex in the most dysfunctional way imaginable. While the women who parade through his bed never seem to last longer than a single night, he remains deeply and platonically devoted to Hannah (Michelle Monaghan), with whom he has been best friends since an awkward encounter at a college party 10 years earlier. But when Hannah departs on a six-week business trip to Scotland, the absence makes Tom’s heart grow both fonder and more pained, spawning a realization that he’s in love with his best friend. Tom’s intended moment of truth, however, is tragically undone when Hannah returns from her trip with a fiancé in tow—a strapping Scottish heir named Colin (Kevin McKidd). Breaking with form, but staying true to her perception of their relationship, Hannah asks Tom to be her maid of honor, a job he accepts with the clear ulterior motive of somehow sabotaging the wedding and proving himself the better man.

The antics and shenanigans that occupy this middle portion of the film, especially after the story moves to the Scottish estate where the wedding is to take place, represent the only really tedious part of what could easily have been a completely unbearable film. It also ends up being shamelessly reminiscent of the fourth-season Friends finale, though any audience demographic too young to recognize similarities to My Best Friend’s Wedding isn’t likely to be any savvier about a television event that transpired one year later.

In fairness, it might be posited that this is the film My Best Friend’s Wedding could have been, and which less discriminating audiences wanted it to be; more Rocky 2 than Rocky ; less cynical, reliably predictable, comfortably conventional at every turn. But aspirations and results don’t always coincide so neatly (as is usually the result of shoddy rewrite work). In this case, it’s quite the opposite. Originally scripted and sold on spec by first-time writer Adam Sztykiel, Made of Honor was subsequently rewritten by the team of Harry Elfont and Deborah Kaplan, whose previous efforts as writers and directors have included Can’t Hardly Wait and the very underrated Josie and the Pussycats. While most rewrite jobs leave too many disparate and disjointed seams to get any sense of who contributed what, in this case the seams are fairly obvious—the bad stuff belongs to Sztykiel and the good stuff to Elfont and Kaplan. That the film can’t seem to keep a cohesive tone is an undeniable irritant, but somehow director Paul Weiland, a very capable veteran of British television who quite nearly sabotaged his Hollywood career with Leonard Part 6 in 1987 before finally setting it right again with 1994’s City Slickers II, manages to massage such endearing performances from a very capable cast that the bad patches feel more like unfortunate hitches.

This kind of material is clearly old hat for Dempsey, who cut his teeth on romantic comedies while still in his teens. McKidd, likewise, is a seasoned pro who invests an otherwise two-dimensional character with real empathy, depth and humor. The film’s revelation and saving grace, however, is Monaghan, a rising star who’s long-touted but still unrealized breakthrough seems now to be a genuine reality. Her earnest mixture of nobility and vulnerability are the film’s heart and soul, the kind of alchemical magic by which careers are transformed overnight.

Given the familiarity of the material and the unevenness of the result, it’s impossible to gauge just how effectively Made of Honor will reach its target audience, but one thing is certain—no one involved will be the worse off for it.