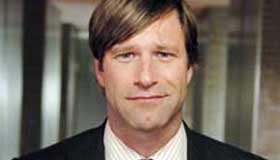 Sadsack Bill (Aaron Eckhart) isn’t too happy with his life. Married to an unfaithful wife (Elizabeth Banks), stuck in a mostly decorative job in her family’s bank and treated with disrespect by pretty much everyone, Bill doesn’t seem to have anyplace to go. But when he’s tapped by his father-in-law to mentor an obnoxious kid (Logan Lerman), his existence takes a decided turn for the better—but in entirely unexpected ways.

Meet Bill, which marks the directing debut of Bernie Goldmann and Melissa Wallack, isn’t a bad movie—just an undeveloped one. There’s a great rapport between Eckhart and “the kid,” which is the only way he’s ever referred to in the film, and Logan Lerman is terrific in the role, a less cynical Holden Caulfield for the 21st century. But the rest of the movie is flat, predicated on the far-fetched relationship between Bill and his wife. She’s too vain and self-absorbed to believably pick a less-than-impressive mate like Bill (the film’s suggesting she’s rebelling against her family’s expectations by marrying the guy), but the movie’s more tellingly undone by the deadly lack of chemistry between Eckhart and Banks. It’s also takes scattershot aim at all manner of appropriate targets—the vapid nature of local television news, the perceived stigma of standing out from the pack in America, the dilemma of dreams deferred and abandoned—but rarely hits the comic bull’s-eye with any of them.

Only when Eckhart and Lerman are doing their funny thing do we see what Meet Bill might have been, had the movie been put together with a little more thought.