close
Noise is a waste of talent 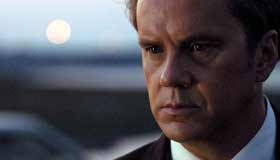 The 19th-century German philosopher Schopenhauer wrote an essay titled “On Noise” in which he railed against the cacophony outside his window and advocated extreme responses such as beating buggy drivers with sticks. The antihero of this film, a kindred spirit of sorts, declares vigilante war on Manhattan car alarms; but instead of following Schopenhauer’s lead and treating the subject with harsh farcical humor, writer/director Henry Bean tries to be serious and political. He quotes Hegel, at length. “Make it stop!” is the logical reaction to the waste of talent, including Bean’s own, and his screed won’t even resonate in New York City.

Bean doesn’t eschew humor completely. Yet his brand of loopy tends to take the form of two women inspecting and discussing their privates (he wrote Basic Instinct 2, after all) and is drowned out by a ponderous dialectic. With tousled, graying locks and a nutty look in his eyes, Tim Robbins plays David Owen, an attorney with a beautiful, cello-playing spouse (Bridget Moynahan), a daughter, and an aversion to the sounds of the city. After years of frustration and a few arrests for violently venting his anger, David becomes “The Rectifier” and makes disconnecting blaring car alarms his crusade. He roams the streets wearing a hoody, armed with a hammer and yellow-and-black stickers that he leaves in offending vehicles. He follows up his smash-and-snip jobs by sending a formal letter to the car’s owner explaining their sonic transgression.

The tech credits are fine, although Bean’s overreaching manifests itself in a flashback structure (are there any more linear narratives?) and faux documentary interviews at the beginning. Noise is a shallow synthesis of ideas about sanity, anarchy and the tension between individual rights and civic welfare. A legal precedent established near the end, according to which noise constitutes assault and battery, rebounds on the movie. Bean’s scenario is too inconsequential to take seriously and not outlandish enough to entertain. You don’t have to be a hypersensitive curmudgeon or a pessimist like Schopenhauer to conclude Noise equals pollution.