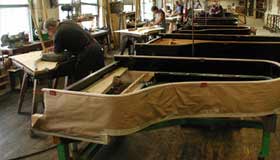 The story of one piano is a microcosm of art, commerce, perfectionism and the American dream in a thorough, but repetitive, documentary that should lure in the some of the matinee crowd before piping up on cable.

Says one tree to another in the Alaskan forest, “How do you get to Carnegie Hall?” Patience, patience, patience. It takes 11 months for a felled log to be turned into a piano by Steinway, arguably the world’s most prominent musical carpenters—particularly since their competitors have largely closed shop. Ben Niles’ documentary follows the saga of one such tree as it’s chopped, transported, trimmed, molded, pressed, sanded and hammered into #L1037, a nine-foot concert grand destined for the Steinway Hall basement in Manhattan where it will audition daily for the favor of pianists like Harry Connick Jr. and Lang Lang. We are assured that every piano has a personality. As Connick insists, sometimes you push on its keys and it pushes back. Which is why players like Pierre-Laurent Aimard feel justified flouncing into the subterranean Steinway showroom before a show at Carnegie Hall and rejecting one six-figure instrument after another in search of “a monster.”

The reason given for Steinways’ Sybil complex is that they’re constructed entirely by hand at a factory in Queens, a neighborhood institution that pulls in lifers who start working there as teens and stay on even when their commutes stretch to two, three or even up to five hours. With a pack of employees from nearly 20 countries, each piano is in truth made a little differently than the next, despite the company’s fixation on symmetry and quality. The factory, it turns out, is even more interesting than #L1037 itself, which a tuner tepidly lauds as “well-behaved.” The workers look more like Chicago Bears fans than Chopin and Beethoven effetes; they cop to never being able to afford one of their life’s labors. But their love for the piano rings through, most loudly from an African plate fitter who rhapsodizes about the day his piano will take center stage at Carnegie Hall with all the pride of a father sending his eldest daughter off to Yale.

Niles’ earnest doc uses its subject as a vehicle for examining teamwork, individuality, and old-fashioned work ethics. That’s nearly all the flick prattles on about and halfway through, it’s a played-out record. We don’t need 10 people telling us each instrument is a special snowflake; we need to hear 10 distinct pianos ourselves, but that thesis is pounded in, yet still intangible. As the movie ticks through from December 2003 to November 2004, all the curious and laborious work that goes into one of the Steinway majesties whirs by, each new procedure left superficially explained and vague as these gruff grunts spend another rough urban day creating works of beauty.