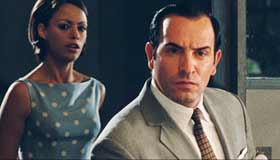 Arguably the funniest spy spoof ever made, director Michel Hazanavicius’ comic resurrection of author Jean Bruce’s legendary super spy has already been a barnstormer in its native France, where a hotly-anticipated sequel is due out later this year. A marginal arthouse release in the U.S. from an upstart distributor like Music Box Films is unlikely to add substantially to that total, but solid word of mouth should make for both relatively healthy returns and a very satisfied audience, eager not just for the sequel but for more helpings of emerging star Jean Dujardin.

While Hazanavicius’ film is clearly a parody of the original Sean Connery Bond films, the OSS 117 books not only predate, but also vastly outnumber, the Ian Fleming novels, with Bruce and his heirs authoring nearly 300 titles from the 1940s through the 1990s. Seven films were also made, largely in response to the Connery pictures, though that series failed to survive beyond the ’70s. Reviving OSS 117 in the context of a spoof, however, is a stroke of genius for which television veteran Hazanavicius cannot be adequately lauded. For not only does the film flawlessly replicate the look, sound and décor of the early Connery films—right down to ’50s-style day-for-night photography in several scenes—but it fearlessly delivers some of the silliest, most uproariously broad cinematic comedy of any major film, either Gallic or American, in years.

Spoofing the spy genre is, of course, no easy task. The James Coburn Flint films, Dean Martin’s Matt Helm pictures, television’s Get Smart, one-off feature efforts like Fathom and Modesty Blaise, the original David Niven/Woody Allen version of Casino Royale and, most famously, the Austin Powers series all attempt to tackle the genre in one of two ways—broad comedy or slightly off-center homage. In OSS 117 Hazanavicius and co-screenwriter Jean-François Halin manage to do both, and brilliantly so.

The story transpires in 1955 as agent OSS 117—aka Hubert Bonisseur de La Bath (Jean Dujardin)—accepts an assignment that sends him to Cairo to unravel the tragic death of his longtime best friend and fellow agent, Jack Jefferson (Philippe Lefebvre). His cover—if one can call it that—will be as the head of a poultry concern, presumably enabling him to do his work without calling undue attention to himself. Unfortunately, Hubert knows only how to call undue attention to himself, innocently managing to insult the culture and religion of his hosts at every opportunity. His cocksure attitude, jet-black hair and lusty love of action and life make him an obvious and consistent target for assassins, Islamic fanatics and other ne’er-do-wells who would foil his mission and send him back to France in a casket.

The film’s political backdrop—the rising power of Egyptian dictator Abdel Nasser and the tense conditions between Egypt, France and England on the eve of the Suez Canal crisis—might initially seem inappropriately weighty for so light a comedy, but the result is quite the opposite, providing the brilliant Dujardin a seemingly endless array of topical concerns to deflate in a fashion that audiences will find refreshingly cathartic and mercifully incorrect.

At the same time, it’s hard to imagine the film working nearly as well without Dujardin in the lead—his Hestonian physique along with an uncanny gift for understatement and comic timing provide him an unparalleled skill set for a film of this sort, by turns debonair and courageous, stupid and ridiculous without ever breaking a sweat. Expect Hollywood to come knocking, if they haven’t already.

Fans of the genre will naturally be more focused on the forthcoming big-budget Get Smart, which will almost certainly make a pile of money and smother OSS 117 with its wake. All the more reason, then, for a hasty DVD release to give Hubert Bonisseur de La Bath his just and rightful due.