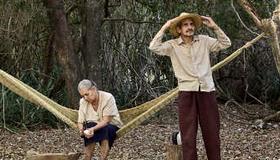 It’s rare to retreat back to the pastoral. Takes longer to get results, and there are few highlights. In Paraguayan Hammock, an isolated family of three living on a plantation far removed from civilization in 1930 is torn apart by a war without end. Not one bullet is fired, not a single drop of blood spilled. The closest thing to an action sequence is the pouring of water from a clay carafe or the peeling of an orange. In antiquated fashion, no peaks here, not many valleys, either—just an austere stillness halting the fast-paced locomotive of plot that one expects when sitting in a theatre for a 90-minute buffet of bells and whistles. In this elliptical slice of farm life, an elderly couple carry on without their son whose return home is fated for the worst. The mundane rhythm and hard labor routine in jungle life goes by the unsaid credo to maximize daylight; this semblance of business-as-usual gets a hard dose by the chorus of conversations from the past ultimately hemorrhaging internal stability. Should be a mouthful for audiences who have limited means to wash down the rare-cooked morsels of uneventful visuals. Though English subtitles are provided, folks must keep up with the fast-moving Guarani tongue that claims multiple ways and syllables to answer yes and no. There will be brave multitaskers domestically, but this film’s true success will lie abroad.

A wide shot holding on a swath of feral land serves as Ramòn (Ramon Del Rio) and Càndida’s (Georgina Genes) living room. The two mosey into the frame from the thicket in the foreground, and while she ties the hammock to two trees he ventures around and peers at the obscured sky, listening to the thunder. A rooster, a yelping dog and flocks of seagulls are backdrop to the conversation. We hear the two think aloud, though their lips never move. While Càndida waves her fan to her face or chops-up jicama with a badass blade, Ramon prowls for a stick to occupy his time. As they sit close together on the hammock, they carry on these telepathic conversations. Much of the banter is about how miserable the heat is or whether to euthanize their son’s barking bitch. Both tend to agree they miss their son and hate this war. And so they sit. With not much left to do but presumably get on with chores, Candida leaves her husband to his transfixed state. But not before he tells her, “I think without me you would die.”

You could count the cuts in this film with a tally of fingers and toes on the human body. There’s not many. The writer/director Paz Encina is very calculated with each slice and splice. You start so far from the pair of elders that you have no sense of their features or expressions. This is a bit uncomfortable, but soon enough you’re right over their shoulders as they perform manual labor. He hacks away with a machete at what looks to be a generous harvest of sugar cane with masterful ease. The shoots are stacked and the leaves collated to the side. Soon enough the patriarch, with his straw hat and facial hair, meets younger men lunching. Ramon sits alone barefoot and with a perplexing gaze over his face. And Càndida is given the same slow greeting. The camera hovers over her shoulder by the creek as she beats the dirty pulp out of the laundry. The thwacking sound seems to be a mixed assault on the heartbeat. Is she angry to be alive, or is she giving such an ass-whipping just to stay alive?

All the while, rambling conversations with their son juxtapose the sweat. While she squats down during her hand-rinse cycle, Càndida—in her head—recalls the last time she spoke to her son. She pleads with him to seek refuge in the orange grove and dodge the draft. Ramon works for two, it seems, and in the voiceover exchange, he commands his son to keep his name despite the longing to change it so that Càndida would never know if he died.

For the few that speckle this habitat, there’s a dearth of information. News is perhaps months or years old. Word of the war’s conclusion is heard during a rare trip to the vet and passed between mother and father in breaking-bread fashion almost days later. And still, there is never a moment when the lips move. While sitting next to an adobe brick fireplace, Càndida is stroking a dead butterfly and dialoguing in the past with a soldier who is not onscreen but in her head. Her co-star in this scene is an old uprooted tree with long, bruised-grey tentacles. This tree is with Ramon, too, when he gets wind of the war’s end. Nobody is there as he sits in a minimally composed doctor’s office setting of doorless bare walls and empty wooden chairs.
So little happens before the eyes and everything seems to be focused on the ears. The dog keeps barking, irritating the parents, and yet one cannot wonder (since their son is its owner) if the dog is a metaphor for the son’s existence. Or could it be the endless war in the form of an unmuzzled snout? Conversations begin to carry on without even the couple onscreen. But as the two continue their figure-eight chatter about inconsequential matters of weather and the dog’s bark, somewhere they do dip momentarily into talk about lost hope. When they do finally appear this time, Càndida looks up into the sky.

Up until the film’s last sequence, the time and day have been irrelevant. It’s any day. Everyday is getting them that much closer to death and one less day without their son. But darkness arrives and their countenance is swallowed-up. The viewer is as far—if not farther—from the action than at the beginning.
To the skeptics, this film might seem to be deficient of any substance and blatantly expecting too much of the audience. The filmmaker surely read and reread Waiting for Godot and mismatched a very difficult war subtext into the humdrum of farm life and topped-off lackluster romance during the golden years. The nose of this vintage style is quite tame and yet strikes with an invisible dagger. The sense of sound emboldens the other senses to fall in line. Retraining the body’s intuitive process is uneasy as humans are creatures of habit. What comes out of it all is a delicate forward gait into life without youth. There will be far fewer birthdays and less smiles and laughter and yet they will have to carry on and keep the meals cooked, the clothes cleaned and the fields tended-to. The constant gaze to the taunting sky is perhaps more than just curiosity if it will or won’t rain. It’s in the Fates’ hands.

The thrust of this film is faint but steady. At times, you are really looking for something in the long-holding shot, and it’s just not there. The point? Not to look too hard. It might just be birds chirping and a dog barking and rustling trees. What matters is how the sum of the parts adds up to an intriguing take on what film as a lyrical device can do. At such a crawling pace, there is a chance for one to be introspective. For a couple living in nature battling for survival, they shed the same tears and experience the same sensations as their urban counterparts. The human condition is universal. Manmade, war stains everything and everyone near and far. The sooner that’s grasped, people can sojourn some and let a story unfold as soft and subtle as it pleases.