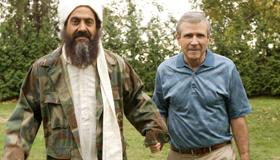 Perhaps the most telling thing that can be said about the antisocial satire Postal is that its most satisfying scene is the one in which hubristic helmer Uwe Boll appears on-camera as a lederhosen-clad caricature of himself. Mere moments after admitting that “it’s true, my films are funded by Nazi gold,” and paying Verne “Mini-Me” Troyer for a personal appearance with a handful of gold teeth presumably plucked from the mouths of Holocaust victims, Boll is shot in the crotch. By whom, it isn’t entirely clear, as a firefight has broken out between his stern security guards, free-loving cultists disguised in Nazi uniforms and Hitler moustaches and  well, Osama bin Laden and al Qaeda. Boll’s self-inflicted dose of Schadenfreude is the only sure shot in this miserable misfire of a satire, which aims for “campy,” but hits “crappy” instead.

Once again—with no feeling (for the material)—Boll has adapted a videogame, this time the same-named first-person shooter about a “Postal Dude” (Zack Ward). Laid off from his factory job and cuckholded by his morbidly obese spouse, “Dude”—the character has no other name—agrees to help his cult-leader uncle Dave (Dave Foley) raise the $1.3 million the Denomination of Organic Monotheism owes the IRS by stealing a shipment of penis-shaped “Krotchy Dolls” stored at Boll’s theme park, Little Germany.

That the “shock” comedy begins with the 9/11 hijackers arguing over the number of virgins they will receive in heaven for martyring themselves and ends with the image of cuddly co-conspirators George W. Bush (Brent Mendenhall) and Osama bin Laden (Larry Thomas, aka Seinfeld’s “Soup Nazi”) skipping hand-in-hand toward a nuclear mushroom cloud might have some of our more patriotic countrymen entertaining fantasies of shooting Boll for real, but the most unpardonable act he commits (to film) here is a painfully prolonged shot of a full-frontal Foley. Anyone expecting a laugh out of Postal will likely feel as though they, like the actor, have been left hanging in the wind.