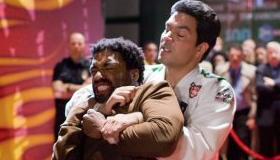 David Mamet is certainly not at the top of his game during the latter half of Redbelt, a drama intersecting the up-and-coming sport of Mixed Martial Arts (MMA) with the Hollywood filmmaking milieu to depict an honorable individual battling a corrupt system. The movie starts out in muscular, typically Mametian fashion but can’t sustain that punch due to his less-than-firm handling of the storyline. As it gets softer, it will lose disciples of MMA and Mamet, plus filmgoers drawn by a talented cast led by Chiwetel Ejiofor.

Even if you didn’t know he trained for five years with a jiu-jitsu master and gained respect for what, according to his director’s statement, he sees as its “vision of the possibility of correct, moral behavior in all circumstances  a modern stoicism,” it’s no surprise Mamet is attracted to this violent and increasingly popular sport. Mamet taking another shot at piercing Hollywood phoniness and mendacity is no shocker, either. The premise also allows him to contrast crooked figures—the gamblers and shady promoters linked to MMA and, at least in his mind, the entertainment business—with a protagonist whose excess integrity and strength give him a superhuman aura but, naturally, also put him at a disadvantage. Ultimately, Mamet’s scenario is hobbled by boxing- and sports-movie conventions and his take feels more ordinary than compellingly idiosyncratic.

In the opening scene, Mike Terry (Ejiofor) is teaching an advanced self-defense class at his bare bones Los Angeles studio, Southside Jiu-jitsu Academy. We hear him before we see him, bellowing commands and encouragement as two students spar. “Improve the position!” “Insist on the move!” “Breathe.” “There’s always an escape.” “Insist. Insist.” “Control your emotions.” Though brief, it’s riveting stuff. Former Special Forces, Mike is an expert at close combat who has never fought for money and avoids competition. “Competition weakens the fighter” is one of his mantras. He has a soft spot for cops and is devoted to making average folk feel safe in their respective lines of duty. “I teach people to prevail,” he declares. Of course, we’ll learn whether he can prevail against adversity. His Brazilian wife Sondra (Alice Braga) complains that he has no mind for business, no killer instinct when it comes to his own economic survival. He’s cash-strapped and already owes a loan shark (David Paymer).

When strung-out attorney Laura (Emily Mortimer) stumbles into his studio and accidentally discharges the weapon of a police officer who is one of his favorite students, Mike’s problems multiply. Later, at a nightclub owned by Sondra’s brother, he intervenes in a scuffle and rescues a slumming movie star, Chet (Tim Allen). Grateful, Chet invites Mike and Sondra over to his house and asks Mike to consult on a script; his wife (Rebecca Pidgeon) offers to help Sondra with her textile import and design business. Abruptly, though, these budding friendships and opportunities fall through. In order to pay back his debts and extricate himself from related quandaries, Mike is compelled to participate in a televised MMA event with, unbeknownst to him, fixed matches. Will he take a dive or, as one vintage Mamet line goes, “Let the wheel come around?” The movie builds to a showdown with his other brother-in-law, a heavyweight in the MMA world, with all the major characters present, including Mike’s esteemed mentor from Brazil and his new lawyer and potential love interest, Laura.

Redbelt ’s strangely rushed and completely predictable third act is either attributable to Mamet having lost focus when writing the screenplay or to second thoughts whilst in production about making a genre film. Mike is a fascinating character, but we need to know more. Mamet runs out of things for him to say or do. Ejiofor is forced to put on a vacant, shell-shocked expression to communicate Mike’s reaction to his misfortunes. When he decides he must fight, it’s unclear exactly what he’s fighting for, other than the unspecified redemption that every movie pugilist seeks and that the formula insists upon. More of Mike’s backstory might help, and a crucial chunk is missing regarding his marriage to Sondra.

Except during the first scene, Mamet doesn’t delve into the philosophy or mechanics of fighting. Nor does he seem to relish presenting Mike’s antagonists (especially the shifty types portrayed by regulars Ricky Jay and Joe Mantegna). It’s as though he pulled back and chose to stay above, or once-removed from, the fray—pure the way his hero strives to be. Mamet tries to have it both ways. Reluctant to enter the sullied ring, to fight under the lights and for the wrong reasons, he ends up there anyway. Like Mike, he’s an outsider who only wants to compete on his own terms. Fair enough. In Redbelt, however, those terms prove to be unexceptional.