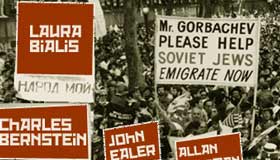 Reducing 30 years of Jewish plight in the Soviet Union post-WWII into less than two hours demands quite a heavy hammer and sharp sickle in the editing room. Well-stocked with material, the threading of stock footage and slow-motion home movies keeps a pace that befits a viewer with a pacemaker. What could have been a tour into the depths of deceit that abounded in Russia runs amok and just can’t keep the juice as it lingers too long on superfluous information and skips too fast past the crucial moments. Boilerplate by design in many ways (the film will certainly be mandatory viewing on syllabi come next fall’s Euro History classes), nothing much in the way of style or highlights stands out—failing Mikail Gorbachev’s few soundbites and 16mm footage buoying the production. Well-cut, the film still follows too straight a course and inserts too many nagging slow-mos that do little but derail the point. While that works for network news spots, it’s not going to age well on the shelf. If you don’t have a sweet spot for a modern Jewish exodus or have no plans to mix your world history studies with off-campus parties, then you might miss this one.

Refusenik is a documentary that chronicles how the Iron Curtain contributed to the alleged prejudice and persecution of the Jewish population in Mother Russia. Additionally, it emboldened a resistance movement that overthrew the policy forbidding its secluded faithful to leave for Israel. A compilation of firsthand accounts from many salt-haired folks who were tortured, jailed and exiled, but fortunately survived—all become central in leading the protest through subversive and downright cloak-and-dagger means, nailing home the point that this was a group effort and that the justice gained was worth the risk.

There are touched-upon stories of brutal trips to nuthouses where the sane were poked and injected with who knows what to make them insane, forced labor camp horrors and even a notable couple who were left to fend for themselves in brutally icy Siberia. The set up is given such ample time there is little left for embellishment.

Jews in the USSR after the war and into the ’80s had to go into the mountains or deep into the forests to assemble, practice their faith or speak their language. KGB operatives were hot on their tail the minute Israel became the place the faithful wanted to flee to for good. After formally asking permission to emigrate, people would be on the outs as citizens. Engineers, scientists—established and articulate—were demoted to elevator-lift operators or took up other menial jobs if they were fortunate enough. A futile attempt to hijack a plane to fly to the Holy Land was a critical moment because that cinched a draconian future. The statement “we were naked amongst wolves” touches on how the military parades and muscle flexing indeed had teeth.

Still these brave sorts figured out how to inspire activism in people from housewives on Long Island to sympathetic blue-collar types in Rome and Toronto to bluebloods in London with free time. Through it all they organized and hit the college campuses and marched on Washington. The system beckoned. Jews were granted pardons and passages to Israel. Some of the most powerful moments are the people who were locked-up being freed and carried around like kings on the shoulders of others.

But while the yolk is solid, the rest is runny and flat. Why so many repetitive interviews that often make little headway? It may be that there is ample footage of folks dancing in the forest or stills of climbs on mountaintops but holding onto these scenes for so long was like serving garnish as the main course. The Siberian quarters replete with the wooden slab (used as a bed) showed that the filmmakers can get to the goods, and yet they relapse to drawn-out perspectives that are hard to follow.

At its peak, Refusenik counters the belief that the masses were an obedient collection of drones lining up for their gruel. There is still fight left when numbers amass. It just takes some architecture from above and will from below. Soon enough, senators go on-camera while making house calls to Russia and promise much to the captive Jews incapable of escape. They keep their promises. Soon enough, Ronald Reagan meets with Mikail Gorbechav and, during one summit addressing nukes, they agree that the Jewish right of passage to Israel was well overdue.

Somehow, though, the effort is just too rigid to push beyond the plotted-out route. It could be that director Laura Bialis wanted to keep things clean and not dirty-up the process. Too many pit stops would sentence the film to its own gulag. But taking few risks and even fewer bold choices to hit-up former members of the elite would have been something. Gorbachev is too sedated and Richard Perle’s insider additions (he actually can talk about something other than Iraq, if you can believe it) are worthwhile, but just fill in the crevices and nothing more. Neat and nice is good for textbook supplements, but aren’t gonna cut it cinematically when the story itself is the only thing going.