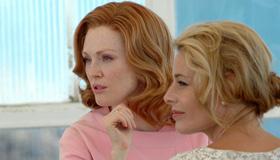 It has taken director Tom Kalin 15 years to return to the cinema after his debut hit Swoon with an ambitious undertaking that gives Julianne Moore one of her most challenging roles to date.

Spanning in six episodes the period between 1946 and 1972, Moore plays Barbara Daly, a woman ahead of her time and trapped by marriage to Brooks (Stephen Dillane) within the confines of the exceedingly wealthy Baekeland family. Kalin puts under the microscope her rocky marriage and her confused emotional relationship with her son (Eddie Redmayne), whose own sexuality is in turmoil.

Capturing the mood of the passing decades with impeccable flair, Kalin also ensures that the overheated histrionics never spill over in to melodrama. By the time he is ready to unveil the ultimate and shocking denouement, the ground already has been cleverly set for what has the feel of a classical Greek tragedy.