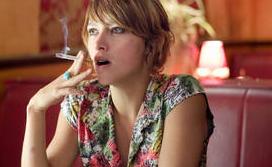 While the aesthetic is charming, colorful and full of whimsy, Anthony Byrne’s partial musical Short Order is wildly uneven and tragically underdeveloped. Like the bastard step-child of The Umbrellas of Cherbourg and those European-awkward Mentos commercials, Short Order sets the story of frightened, yet gifted, chef Fifi Cocoa in a perfectly self-aware movie set touched with childlike wonder. Confusing then that the dialogue is littered with vulgarity and truly crass jokes about sex. It’s hard to pull off childlike whimsy and masturbation jokes. Adding to the confusion are the cameos of Vanessa Redgrave and John Hurt (Hurt does an especially odd/poor turn as a begging/bitchy maître d') that are confusing and awkward. References to Moby Dick and Sartre are consistently implanted in the film but so awkwardly used the text actually devolves because of them, resulting in something that feels strikingly like a sophomore year films school project. It’s terribly difficult to identify the film’s audience, which makes it that much harder to imagine who would pay to see it.

If perhaps we read the film as cult kitsch, (which I don’t think it is) Short Order does have a certain Rocky Horror appeal to it. There are only two musical numbers (book-ending the film) so singing along isn’t as logical an accompaniment to the film as say, repeating horrendous lines of dialogue (“The best omelet chefs are chronic masturbators.”). In this universe, with all its on the nose dialogue and philosophical exposition, the pleasure of gastronomy is the pleasure of sex. Protagonist Fifi (Emma de Caunnes) explains that ‘if our first exposure to food is the breast and this is guided by desire, our introduction to food is married to sex.’ Fifi is well known among the culinary community, first for her exile at a short order stand called “Ishmael’s” (as in “Call me Ishmael”) and second for her erotically charged meals. Her employer at Ishmael’s, murderous master chef Paulo (Rade Serbedzija), thinks the greatest meal that could ever be, would be made of a great chef. Simply, he, Paulo, would be the tastiest meat. Due to a tiny and contrived back-story involving something like a culinary mafia, Paulo lost multiple restaurants and went into hiding, taking quiet revenge on his adversaries by chopping them up and cooking them into a “re-visioning of Osso Bucco” that’s apparently quite tasty. Both of these characters, as well as every other character that crosses Fifi’s path, is laconically searching for his/her missing piece. Afraid her next step will be a mistake, Fifi whiles away her exile smoking cigarettes and flirting with the darling delivery girl Catherine (Cosma Shiva Hagen) over their corresponding existential crises. Did I mention all the women in this film are lesbians? This detail is somehow less than crucial since it fits right into the film’s other absurd rashes of juvenilia.

Perhaps it’s unfair to imagine writer/director Anthony Byrne as a 14-year-old boy with connections. Perhaps there’s a rationality to the repetitions in the film: The Moby Dick theme reiterates the endless search we all face for our “white whale,” the invocation of Being and Nothingness reigns in the notion we’re incomplete, the characters’ general lack of direction signals a sort of youthful listlessness that feels like being lost—but we’re not lost. We’re on a self-consciously, 60’s inspired, brightly colored, musical sound stage. If we’re lost, we’re lost in artifice, and perhaps that’s the agenda. Perhaps existential crises is lost in a highly structured reality that offers little room for searching—what with the set only taking up like half a block of real world space. Perhaps this is what Sartre would face if transplanted from his native era to whatever the hell time Short Order is meant to take place in (present day?). And perhaps the absurdist bent is meant to connote the author’s expectation of us as audience members. We’re meant to make the leap through time, space and all the philosophers that bridge Sartre and sayDerrida? (It’s been a while since college.) Yet ultimately, isn’t the film about the mysterious connection between sensory experiences? Already that’s a messy quagmire of hard to define mood and feeling, and for that matter, so is Short Order messy and hard to define. Though, I suppose, the film, like Junior High, was not without it’s pleasantries.