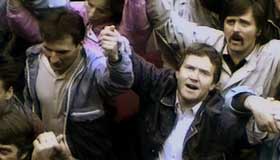 Heartfelt and well-organized doc about the historically oppressed Baltic nation of Estonia shows the power a country wields when bolstered by culture. The traditional song festival of Estonia, Laulupidu, began in 1869 and offered the country a seemingly gentle and apolitical context in which to celebrate “being Estonian.” When trials hit the nation, and governments sought to take control of the land, it was through this same singing festival that the country could, en masse, collect with their eyes fixed on independence. Film has clear and strong prospects in educational markets and good DVD prospects, but might be a hard sell in theatres due to its niche subject.

Like its neighbors Latvia and Lithuania, Estonia endured great oppressions in the period from World War II to the dissolution of the USSR. The beginning of WWII brought Estonia mass executions and disappearances. Losses from these war-related (though not battle-related) tragedies topped 10,000, which is a massive number for a nation of around a million residents. Many were sent to gulags and some avoided the war and prison camps only by living in the wilderness as “Forest Brothers”—a fate that lasted decades for some. Torn by the oppressive invaders and bound to ownership by the Molotov-Ribbentrop Act, Estonia had stridently limited personal freedoms and little culture to support it.

In 1969, the nation united under the guise of the song festival’s centennial, but their shared grief and desperation to unite for a national cause transformed the event into the catalyst for years of nonviolent political organization and activism. Their songs carry with them a tone of magic and the transformative quality of Christmas carols. Attendance at Laulupidu grew in staggering numbers, at one point boasting attendance of one in three Estonians. The sheer magnitude of bodies is impressive, but the sight of grown men, eyes swelling with national pride, is truly memorable. That all nations could be so proud.

The doc features interviews with the major names in the liberation movement and in the organization of the Laulipidu since that magical centennial celebration. News footage from all walks fleshes out the constantly tenuous struggle between Estonia, her people and the USSR that oppressed them. While at times the film enters into possibly needless detail, the ultimate goal of the film is managed as diligently as the film’s subjects manage their goal of liberation.

Narrator Linda Hunt informs us “Estonia has no fairytale heroes.” Their hero is the shrewd old barn keeper who sits, waits and works until time has come to take action. “Patience is a weapon; caution a virtue.” The gentility and the power of this archetype, and the nation whom it inspired, cannot be overstated.