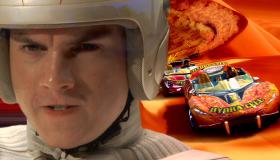 The Wachowski Brothers use layer upon layer of primary-colored visual effects to build a virtual universe on the foundation of Tatsuo Yoshida’s anime series Speed Racer. Hours spent playing with their Hot Wheels sets (one eye glued to the TV) have resulted in a live-action kaleidoscope that, much like the original cartoon, is fascinating for how it engages viewers with familiar, comforting elements and deflects them with its stiff, plastic quality. Members of the NASCAR nation, young and old, will appreciate the technical horsepower. But will they be drawn in? And how will they react to the eroticism coursing through the otherwise traditional story? (Swigging milk in the winner’s circle gains new meaning.) Those uncertainties, plus the fact Speed Racer takes a long time to cross the finish line, make dethroning Iron Man a dodgy prospect.

Although their biggest debt is to the light-emitting diode and the 21st-century cyber mindset, the Wachowskis imagine an international racing circuit that combines the dystopian violence of Norman Jewison’s Rollerball (1975) and the old-world, competitive glamour of John Frankenheimer’s Grand Prix (1966). The art direction relies on a garish mélange of Americana styles from 1950s, ’60s and ’70s, and the narrative shuttles back and forth on multiple visual planes. A record must’ve been set for the number of hours actors spent in front of green screens. Considering how the plot is lapped by the digital craftsmanship, it’s a wonder it remains intact.

Supported by his family and in memory of his dead brother Rex, Speed (Emile Hirsch) upholds lone-wolf honor and beats corruption from behind the wheel of the Mach 5. He spurns the advances of an industrialist sponsor and joins another team in the same perilous cross-country rally that cost Rex his life. Glory awaits if he can survive the ordeal and pass through various coming-of-age oil slicks. Little bro Spritle (Paulie Litt) and his pet chimpanzee Chim-Chim provide comic relief, and there are smatterings of cartoonish violence, a ninja attack and assorted random curiosities. Along with in-your-face visual devices, the Wachowskis present the story’s themes in explicit fashion, spelling out lessons and—on at least one occasion—breaking the fourth wall. While they celebrate and subvert genre conventions, their tone isn’t mocking. They want kiddies and their chaperons to enjoy and question, yet the approach does distance the audience.

Many viewers will find the barely concealed sexual subtext entertaining, some will find it unwholesome, and it will add to a general sense of unease in others. You certainly emerge mindful that cars are to adolescent male desire what horses are to tween girls. A scene in which Speed and Trixie (Christina Ricci) are parked at Inspiration Point goes beyond coy innuendo and almost into kinky camp. Their relationship is overshadowed by the movie’s not-so-latent homoeroticism however. Racer X (Matthew Fox) might as well be wearing seat-less chaps and wielding a whip, ready to make his admiring protégé Speed submit. (A line about ripping a rival driver a new tail pipe is another obvious example.) Doubts about Racer X’s identity raise the specter of incest, as does the “you take my breath away” encouragement Mom Racer (Susan Sarandon) gives Speed. The only asexual character is John Goodman’s Pops. A big deal is even made of Spritle being grossed-out by displays of affection. Since they often seem to be in a trance-like state, it’s unclear whether the principal actors were aware of the overall vibe. In any event, the performances are less important than the look of the performers.

The arousal gauge is purposefully shattered during the movie’s climax, which amounts to a protracted communal orgasm complete with fireworks. When Speed wins the Grand Prix, everybody’s world is rocked. If smoking weren’t a screen no-no, the checkered flag would be the cue to light up a post-coital cigarette and wash it down with a gulp of frosty-cold milk. Speed’s victory bliss involves more than the triumph of integrity over greed or the affirmation of top-notch driving skills and the appeal of clean-cut jocks who resist the call of illicit desire. Because everything is on or near the surface in Speed Racer, divining the Wachowski’s intentions or searching for hidden meanings is unnecessary. Above all, they succeed in reminding us that—despite the dominant role of computers in the moviemaking process—film is still a tactile medium and even PG-rated family movies are erotic at their core.