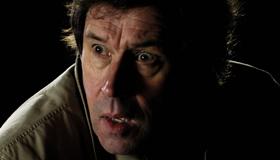 A few years back, a retirement-home worker in Fort Worth, Texas accidentally hit a pedestrian with her car. The unfortunate fellow became lodged in her windshield and, fearing she’d get busted for driving under the influence, she left him there to die. Stuart Gordon ( Re-Animator ) turns this grim item from the stranger-than-fiction file into a provocative thriller in which horror and suspense collide with biting social commentary. Wickedly humorous and niftily harsh, Stuck is a low-budget conversation piece by a veteran director with a cult following. It will trigger sharp reactions pro and con, and all the word of mouth, especially within the 18-35 demographic, means it has the potential to earn an indie bundle.

The question is whether young adults who react positively will realize their generation is being skewered and, conversely, whether older viewers will appreciate that Gordon is more than a schlockmeister and is, in effect, on their side. When striving for relevancy, filmmakers usually treat real-life incidents, including urban legend fodder such as this, with docudrama solemnity. Gordon and screenwriter John Strysik dare us to dismiss Stuck as exploitative trash. They’re so good at fulfilling our sordid expectations, it’s easy to overlook how the movie succeeds as a morality play, poking at race and class tensions and contrasting the ethical fiber and wherewithal of two generations. Without ascribing undue depth or any great socially redeeming value, the title card “inspired by a true story” strikes me as both ironic and appropriate.

Brandi Boski (Mena Suvari) is a kind, if rather dim, nurse’s assistant who patiently tends to the needs of elderly nursing-home denizens. Having earlier learned that she’s up for a promotion, Brandi parties at a nightclub with her drug-dealing boyfriend Rashid (Russell Hornsby) and her colleague Tanya (Rukiya Bernard). Feeling no pain as she climbs into her car for the drive home, she slams into Tom Bardo (Stephen Rea), a destitute, middle-aged father who’s been thrown out of a seedy hotel and is spending his first night on the streets. Walking to a homeless shelter when the accident happens, Tom has faced inane bureaucracy at every turn while trying to get his life back together. Brandi’s dilemma is simple: What to do with this human projectile leaking blood onto her passenger seat, half his torso inside the car, half on the hood?

The physical dimension of his ordeal is presented with graphic precision. You’ll give your windshield wipers more respect after watching Tom extract one impaling blade from his body. The squishing and squirting sounds are as gruesome as the visuals. Explicitness is integral to Gordon’s aim of prompting us to think through the visceral situation, even as he pushes it to disgusting lengths. The characters develop, and we become emotionally involved—rooting against Brandi and for Tom, of course, but also feeling some sympathy for wannabe gangsta Rashid. It’s fascinating to watch Brandi go from sweet nightingale to homicidal vixen over the course of 85 engrossing and suspenseful minutes. In a harrowing display of exculpatory delusion nicely played by Suvari, she convinces herself she’s the victim.

Gordon has made a highly entertaining and ultimately very traditional cautionary tale about free will. Reading Brandi as a stand-in for members of a hedonistic, wastrel generation, who, when confronted with a choice between right and wrong, choose the latter as a no-brainer. This obvious interpretation doesn’t let those of us who find Stuck extremely disturbing and extremely fun off the hook, however. At one point, Tom asks Brandi “What the [bleep] is wrong with you?!” Gordon’s achievement is to force anyone recommending the movie, even as a guilty pleasure, to pose this question to him or herself.