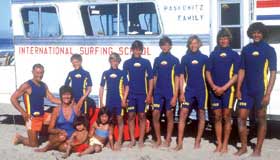 This fascinating documentary of a self-obsessed 85-year-old legendary surfer, Dr. Dorian “Doc” Paskowitz, who turned his life around after introducing the sport to Israel, isn’t really about riding the waves as much as a primer on alternative parenting. Combining lots of vintage footage, photos and home movies interspersed with newly shot interviews, this remarkable docu portrait of a most unusual man (to say the least) and his large family resonates strongly and tells a whopper of a story. With careful handling by distributor Magnolia Pictures, this film could draw strong word of mouth as a worthy specialty item that represents an eclectic cross of Exodus, The Endless Summer and Parenthood.

Filmmaker Doug Pray carefully unfolds his unique tale. Paskowitz, a highly successful doctor and Stanford grad, lived the good life in Hawaii, was admired by colleagues and even urged at one point to run for governor. Two failed marriages, no interest in money or social status and a love of the ocean all converged to convince him to “drop out” and go to Israel for a year, where he communed with the Bedouins, became obsessed with a healthy diet and brought a savvy Hawaiian style of surfing to Tel Aviv for the first time.

Upon his return to America, he met his third wife Juliette, who was the first woman to understand his unique needs—which included an almost addictive desire for constant sex. Their bedroom activities led to a succession of seven sons, then a daughter and, finally, one last boy who all lived and slept “like puppies” in a 24-foot camper usually parked on a beach somewhere. The sexcapades didn’t stop with the births. One of the film’s most amusing sequences has the younger Paskowitzs recalling the loud nightly lovemaking of their oblivious parents in the cramped trailer.

Eschewing formal education for his kids, the elder Paskowitz packed them up and hit the road, usually letting the promise of gnarly waves dictate their destination. With no formal school for the brood, Paskowitz firmly instilled a strong sense of his Jewish religion and believed they would achieve a better education living literally on the (mostly) California coastline. Many of the kids note that their upbringing was the envy of all their friends, as it seemed like they were on a permanent vacation. Some became world-class champion surfers, and the family operated a successful “surfing camp” that provided the main source of income to support their bohemian lifestyle.

The latter half of the first-rate doc focuses on current-day interviews with family members that detail the human costs of the unconventional upbringing, including rising tensions, lingering resentments, long estrangements and, ultimately, a reunion that examines the wisdom of lives lived on the fringe and dictated by a strong-willed father who clearly thought he knew best.

This is a terrific film that offers not only a word to the Surf -wise but also to anyone else who thought only their family was different.