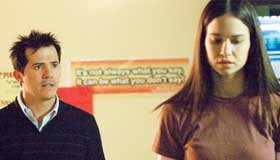 The line between sociological examination and sexual exploitation is blurry in The Babysitters, a titillating film that thinks it’s thought provoking. Does director David Ross fancy himself courageous for writing a script about adolescents who form a prostitution ring to satisfy middle-aged married men? At a Midwestern high school with a Mean Girls ambiance, the relatively upscale teens in question service the fathers of kids they’re babysitting.