The Children of Huang Shi 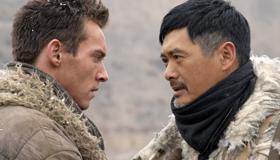 Based on the true-life story of journalist/adventurer George Hogg (Jonathan Rhys Meyers), The Children of Huang Shi tells the story of his experiences in China during the Japanese occupation—including the events of the infamous sacking of Nanking, which he witnessed. While the film features international talent of the highest stature, from Tomorrow Never Dies director Roger Spotiswoode and his star Michelle Yeoh, to Chow Yun-Fat and screenwriter James MacManus, and a good deal of war action (including some digital effects), it’s not a traditional epic and it’s about events from the distant past, which could dampen box office prospects.

The film centers on a young British writer (Jonathan Rhys Meyers) who encounters American nurse Lee Pearson (Radha Mitchell) and the leader of a Chinese communist sect (Chow Yun Fat) as he searches for the truth about the Japanese occupation. Pearson is minding an orphanage of 60 boys as the imperial forces are approaching. Having witnessed the brutality of the Japanese in Nanking, they decide to lead the children on an extraordinary journey along the Silk Road—across 700 miles of treacherous terrain, through snow covered-mountains and an unforgiving desert.

The Children of Huang Shi is a gripping melodrama with great historical import that also manages to foreshadow the contemporary zeitgeist of our present day. Though the players and locations have changed, all the circumstances have stayed the same—occupation, rebellion, schism—all set against the tragedy of humankind’s continuing inhumanity, except for those few instances where a few people rise to the occasion, as did George Hogg and a few others represented here.