close
Second trip to Narnia is a pleasure

The Chronicles of Narnia: Prince Caspian 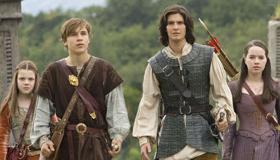 Fans of 2005’s The Chronicles Of Narnia: The Lion, The Witch and The Wardrobe can rest easy, as Disney and Walden Media ensure the successful continuation of the Narnia films with this crackerjack sequel that matches, and in some ways surpasses, its predecessor. In this edition, the story picks up 1,300 years later (in Narnian time, only one year for humans), when the four young Pevensie siblings are summoned back to help Prince Caspian defeat his evil uncle and assure his rightful place on the throne. With the first film grossing north of three-quarters of a billion worldwide, and a prime summertime release, exhibitors should be minting money.

The world of Narnia is now a much different place than the first time moviegoers visited. It’s 1,300 years later according to Narnian clocks, even though only a year has passed by human calculation. As the press notes say, “The lion hasn’t been heard from for 1,000 years, the witch is dead and the wardrobe is gone.” Now, as the kings and queens of Narnia, the Pevensie siblings are transported from a British World War II-era train station to discover the magical land just isn’t what it used to be. It has been taken over by an evil and aggressive band of humans called the Telmarines, led by the unforgiving Lord Miraz (Sergio Castellitto). The four Pevensies—Lucy (Georgie Henley), Susan (Anna Popplewell), Peter (William Moseley) and Edmund (Skandar Keynes)—find themselves summoned back to help Prince Caspian (Ben Barnes), the dashing heir to the throne, defeat his hate-mongering uncle Miraz. Their mission to return Narnia to its former days of glory is aided by the usual assortment of Narnian creatures—talking animals, minotaurs, centaurs, etc.—highlighted by the emergence of some nifty new characters including the dwarves Trumkin (Peter Dinklage) and Nikabrik (Warwick Davis) and, best of all, a swashbuckling mouse named Reepicheep (voiced brilliantly by Eddie Izzard).

As with any would-be summer blockbuster, the members of the special effects team are the real stars, and they haven’t stinted in bringing this fantasy world to life. As in the first film, the creature and animal work is first rate, so good you might find yourself thinking you’re watching the real thing. Andrew Adamson’s extensive animation background ( Shrek, Shrek 2 ) aids him in putting together the intricate visuals, but this time the director really excels in the ambitious Braveheart -like battle sequences, which are pulse pounding and epic and don’t seem to be relying on a lot of CGI trickery to make them realistic. Considering the hoops they must jump through, all the actors acquit themselves nicely, with valuable contributions coming from new cast members Dinklage, Barnes and Castellitto in particular. Voice work is exceptional including Izzard and Liam Neeson returning in a cameo as the godlike lion Aslan, the heart and soul of the Narnia adventures. Producers have even found a way to briefly bring back newly minted Oscar winner Tilda Swinton as the White Witch.

With box office success almost assured, it looks like Disney has finally found their Harry Potter and should be in the Narnia business for years to come.