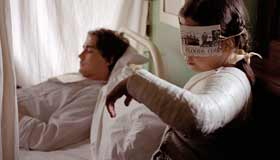 It would be nice if the same critical community that made by-the-numbers fantasy projects like Spider-Man 2, The Incredibles and Ratatouille among the best-reviewed pictures of their respective years would grace a truly novel and ravishing vision like director Tarsem Singh’s The Fall with enough buzz to help it find an audience, though based on the two years it’s taken for this movie to get even a token release and the reaction at a recent press screening, that may be a slim chance. The Fall was allegedly self-financed by Tarsem out of wages he earned as one of the hottest music-video and commercial directors in the business; it took him four years to film, in a shoot that spanned 18 countries; and it’s easily one of the more insane and provocative labors-of-love that English-language filmmaking has seen in recent times. It’s also a wonderful movie, if you’re willing to allow for an American film to express itself primarily through art direction and cinematography rather than the well-worn mechanics of the Hollywood three-act plot.

In the best sense, The Fall is a paean to the art of storytelling as it existed before mass-produced visual media replaced the spoken word as the primary creative medium. In The Fall ‘s simple cross-cutting plot, Roy Walker, a lovesick, silent-era movie stuntman (played with Gary Cooper-esque ease by TV star Lee Pace) is paralyzed in a stunt gone wrong that may or may not have been a suicide bid. In the hospital, Roy befriends another patient, a radiantly innocent 5-year-old girl (the charming and naturalistic Catinca Untaru) whom he lures to his bedside with promises of fantastical stories. Roy’s grim and secret plan is to trick the child into stealing a bottle of pills from the hospital dispensary so that he can end his life. But the guileless child is unaware of this agenda, and the fluid and adaptable epic that unspools in her mind becomes a testament not only to her own vivid—if inchoate—imagination, but also to the exchange between teller, tale and listener that is at the heart of every fiction.

The beautifully designed and photographed fable Roy spins is also wayward and simplistic, as befitting a story improvised to please a child. In a magical landscape, an evil ruler named Odious is tracked down and attacked by a band of heroes: a bandit king (Pace again) and sidekicks including an Italian munitions expert (Robin Smith), a liberated slave (Otto Benga) and even the famed naturalist Charles Darwin (Leo Bill), who, in a witty touch, is accompanied by a friendly monkey named Wallace. Details from Roy’s anguished soul creep into this ripping yarn slowly; in a late scene borrowed from J.D. Salinger’s classic short story “The Laughing Man,” an embittered Roy kills off major characters as the child, herself injured in a fall while trying to get Roy his “medicine,” begs him to stop. This protracted sequence may be unbearable for some, but it’s really at the heart of Tarsem’s message. In his view, there’s a pitched war on between the thousand shocks and sorrows of the human condition and the more containable world of art and expression. If The Fall is going to have even a chance of dragging its damaged characters into the light, the full measure of the darkness they carry inside of them has to be taken first. The easy affirmation a different kind of movie would reach for is unavailable here.

In a lovely and lyrical closing montage, the little girl remembers Roy by the stunts she sees at the movies after their parting. The screen comes alive with the amazing slapstick of the Chaplin-Keystone-Keaton era, and we marvel all over again not only at the chaotic beauty of human bodies in harrowing motion but at the precarious margin between escape and catastrophe these ancient clowns and tumblers charted. The Fall stakes out its own claim on similar territories, and it does so with more visual panache, more craft and more passion than we are likely to see in an entire slate of corporately produced fantasy product any time soon.