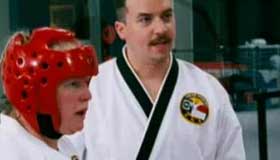 Ridiculously inexpensive-looking and evidently cast with amateurs and novices, The Foot Fist Way, which is the literal translation of the Korean “tae kwan do,” nonetheless has an irresistible charm and infectious energy. First-time filmmaker Jody Hill, who holds a third-degree black belt, enlisted the help of friends to create what appears to be the most nonsensical storyline they could concoct around the sport.

Danny McBride plays Fred Simmons, a self-important, self-aggrandizing tae kwan do instructor who is shameless in bullying and defeating the children he teaches at his small-town martial arts school. When he finds out that his tarted-up wife Suzie (Mary Jane Bostic) is having an affair with her boss, he sets out with his buddy and fellow tae kwan do expert Mike (Hill) to meet his hero, martial-arts movie star Chuck “The Truck” Wallace (Ben Best). Fred is overjoyed when, after an eventful first meeting, Wallace agrees to come to Fred’s hometown to make an appearance at his school. However, Fred’s invitation to Wallace to stay at his place ends in disaster when Suzie—whom by this time had been forgiven for her past indiscretions—ends up in a tryst with the actor. Humiliated and enraged, Fred decides that the way to win back his honor is to challenge Wallace to a one-on-one tae kwan do battle in front of the entire school.

While The Foot Fist Way does not have the widespread appeal of the similarly silly Napoleon Dynamite and is unlikely to match its box office success, Jody Hill’s debut effort could certainly do well among specialty audiences. Hill and comrades are obviously having a good old time in this homage to the 1970s martial arts B movie, and they do an excellent job at taking the audience right along with them.