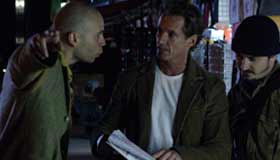 The protagonist of The Memory Thief papers the walls of his rattrap apartment with photographs ripped from books on the holocaust, their torn edges forced together with wide strips of masking tape. It’s an image that effectively encapsulates playwright Gil Kofman’s directorial debut, which is composed of often-arresting images that fail to fit together smoothly or seamlessly. Tale of a gentile tollbooth worker who becomes so obsessed with the testimony tapes of concentration-camp survivors that he eventually shaves his head and tattoos one of their numbers on his arm may attract a bit of attention from arthouse audiences, but is ultimately too abstract to pull in crossover crowds.

With the whole world literally passing him by as he collects tolls on a Southern California freeway, Lukas (Mark Webber) is alienated and adrift. Until, that is, a skinhead sitting in the bed of a pickup truck tosses a copy of Mein Kampf into his toll booth, shouting “Heil Hitler, Santa” at Lukas, who is wearing a red-and-white hat in a half-hearted acknowledgement of the approach of Christmas. The chain of events gets even unlikelier, however, as holocaust survivor Zvi Birnbaum (Allan Rich) happens to subsequently pass through Lukas’ lane, and is so incensed at the sight of the Nazi manifesto that he offers to buy it for $10 so he can take it home and burn it. But Lukas refuses to sell it, inspiring Birnbaum to return to the tollbooth with a VHS tape of his testimony on the horrors of the holocaust.

A little later, Lukas happens to read Birnbaum’s obit in the newspaper, so he goes to the older man’s funeral, where he happens to run into Mira Zweig (Rachel Miner), an attractive niece of the deceased who happens to work in the hospital where the woman Lukas calls his mother (Karen Landry) lies in a coma. There are a lot more happens to s here, leaps of logic that drive home the unrealistic nature of the fictional narrative Kofman has stitched together. There is no real reason, for instance, for Mira to continue to associate with the clearly deranged Lukas except that the plot demands she introduce him to her father (Jerry Adler), who is also a holocaust survivor. Soon enough, Lukas lands a part-time job at a nonprofit, transcribing testimony tapes, and becomes obsessed with getting Mr. Zweig to tell his tale on camera—dredging up memories so traumatic that they threaten to shatter the entire family.

Kofman’s movie is, in part, a meditation on the appropriate use of survivors’ stories—and on what, as the title implies, constitutes the “theft” of those dramatic memories. In rather on-the-nose dialogue, characters muse about a fictional film director who has stopped making horror movies in order to make movies about “the world’s greatest horror,” and Lukas’ boss at the nonprofit stresses that the point of taping the testimonies has nothing to do with entertainment. It seems more than a little ironic, then, that Kofman taped his own interviews with real-life holocaust survivors for a fictional feature like The Memory Thief, and—out of all of the intriguing images in it—those nonfictional close-ups on their weathered and weary faces are unarguably the most powerful.